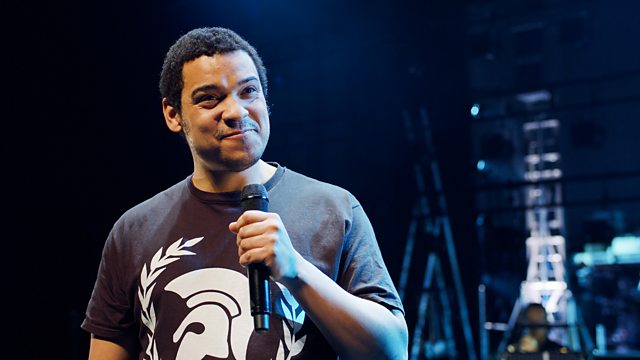 Orpheus in the Record Shop

Ancient myth is charged with the magical crackle of vinyl in rapper and playwright Testament’s timely musical story of a young man’s journey out of isolation.

She cared for him, she understood him… And now she’s gone.

Orpheus is alone, playing tunes in his record shop, when a visit from an enigmatic stranger sets music, myth and his own fragile reality into a spin. Driven by an astonishing original soundtrack of hip-hop, soul and funk, he ventures back into the past to confront some painful truths in the hope of reconciling himself with his future.

Inspired by ancient Greek myth, acclaimed rapper and playwright Testament fuses spoken word and beatboxing with a cinematic score performed by members of the Orchestra and Chorus of Opera North.

In an extraordinary feat of storytelling and musicianship, Testament fills an empty theatre with Orpheus’s dreams, reminiscences and struggle for redemption. The result is a compelling examination of isolation and an affirmation of the need for kindness and empathy, and of trust in the redemptive power of music.

A Leeds Playhouse and Opera North co-production premiered to a socially distanced audience in October 2020, Orpheus in the Record Shop returned to the locked-down Leeds Playhouse in early 2021 to be reworked for this new film.

See all episodes from Lights Up