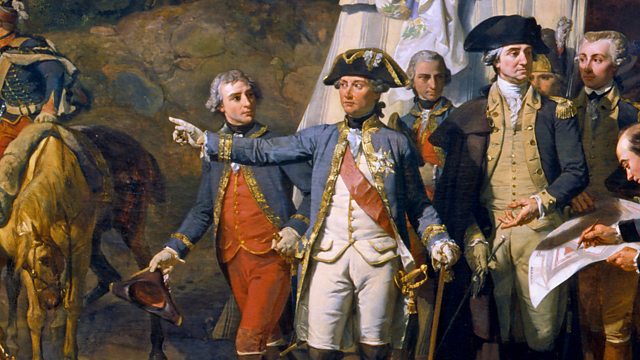 Melvyn Bragg and guests discuss why France supported the USA in its revolutionary war against Britain and how that related to the French Revolution a few years later.

Melvyn Bragg and guests discuss the treaties France entered into with the United States of America in 1778, to give open support to the USA in its revolutionary war against Britain and to promote French trade across the Atlantic. This alliance had profound consequences for all three. The French navy, in particular, played a decisive role in the Americans’ victory in their revolution, but the great cost of supporting this overseas war fell on French taxpayers, highlighting the need for reforms which in turn led to the French Revolution. Then, when France looked to its American ally for support in the new French revolutionary wars with Britain, Americans had to choose where their longer term interests lay, and they turned back from the France that had supported them to the Britain they had just been fighting, and France and the USA fell into undeclared war at sea.

The image above is a detail of Bataille de Yorktown by Auguste Couder, with Rochambeau commanding the French expeditionary force in 1781

Frank Cogliano
Professor of American History at the University of Edinburgh

Frank Cogliano at the University of Edinburgh

Michael Rapport at the University of Glasgow

Carol Berkin, A Sovereign People: The Crises of the 1790s and the Birth of American Nationalism (Basic Books, 2017)

Richard B. Morris, The Peacemakers: The Great Powers and American Independence (Harper & Row, 1965)

Joel Richard Paul, Unlikely Allies: How a Merchant, a Playwright, and a Spy Saved the American Revolution (Penguin, 2010)

Letter from Benjamin Franklin and Silas Deane informing the US Congress about the French Alliance, 8 Feb. 1778 – Founders Online: National Archives

Most Important Diplomatic Action? - Journal of the American Revolution, July 9, 2014