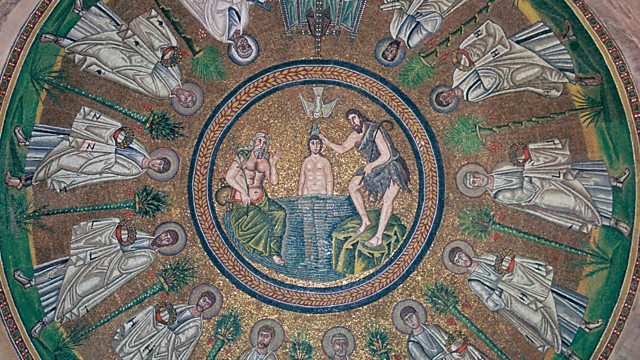 Melvyn Bragg and guests discuss a widely shared form of Christianity, followed in the Roman empire and by the Goths across its borders, that became an infamous heresy.

Melvyn Bragg and guests discuss the form of Christianity adopted by Ostrogoths in the 4th century AD, which they learned from Roman missionaries and from their own contact with the imperial court at Constantinople. This form spread to the Vandals and the Visigoths, who took it into Roman Spain and North Africa, and the Ostrogoths brought it deeper into Italy after the fall of the western Roman empire. Meanwhile, with the Roman empire in the east now firmly committed to the Nicene Creed not the Arian, the Goths and Vandals faced conflict or conversion, as Arianism moved from an orthodox view to being a heresy that would keep followers from heaven and delay the Second Coming for all.

The image above is the ceiling mosaic of the Arian Baptistry in Ravenna, commissioned by Theodoric, ruler of the Ostrogothic Kingdom of Italy, around the end of the 5th century

Robin Whelan
Lecturer in Mediterranean History at the University of Liverpool

Robin Whelan at the University of Liverpool

Bart D. Ehrman, The Triumph of Christianity (One World, 2018)

Robin Whelan, Being Christian in Vandal Africa: The Politics of Orthodoxy in the Post-Imperial West (University of California Press, 2018)