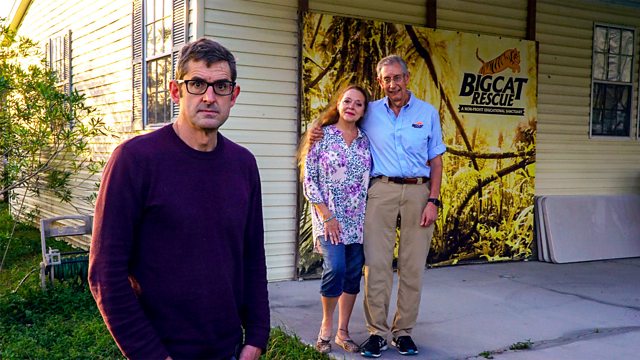 A decade on, Louis revisits Joe Exotic - 'gay hillbilly', convicted felon and cult figure. He digs deep into Joe's background, meets Carole Baskin and asks what made the Tiger King.

This 90-minute special sees Louis Theroux travel to America to investigate the story of a man who has become one of the most controversial and captivating icons of recent times: the gun-toting, self-described 'gay hillbilly' and 'Tiger King' Joe Exotic.

A decade on from when he first met Joe for the documentary America’s Most Dangerous Pets, Louis returns to Oklahoma, responding to a direct call from Joe to tell the ‘real story’ and to explore the saga of an animal hoarder turned convicted felon. Joe now resides in a federal prison, having been found guilty of a murder-for-hire plot and multiple animal cruelty charges. But rather than living as a pariah, Joe is now a media phenomenon, the object of international obsession for pundits, celebrities and viewers, with a well-funded campaign team attempting to win him a presidential pardon.

Looking back at his original documentary, Louis reflects on hours of unseen footage and sets out to understand who the real Joe Exotic is and how he used his considerable charm and wiles to assemble a vast menagerie of animals and humans, all roped into a grand project of vanity and deception. Meeting old friends and family members of Joe’s, Louis picks apart the true crime story of how Joe came to be convicted. He also tells the story of Joe’s captivating charisma and the way in which it became a key ingredient in a viral television sensation, with life-changing consequences for all those involved - most of all Carole Baskin, originally the object of Joe’s vitriol, who found herself the target of his murder-for-hire plot and a mass trolling campaign.

He digs deep into Joe’s family, unearthing the origin story of Joe’s pathology and laying bare an only-in-America saga that is part crime story, part media spectacle, part animal rights campaign but ultimately a 21st-century fable of a cowboy-cum-cult leader whose very fragility became a source of power - a power which, in some respects, persists to this day.