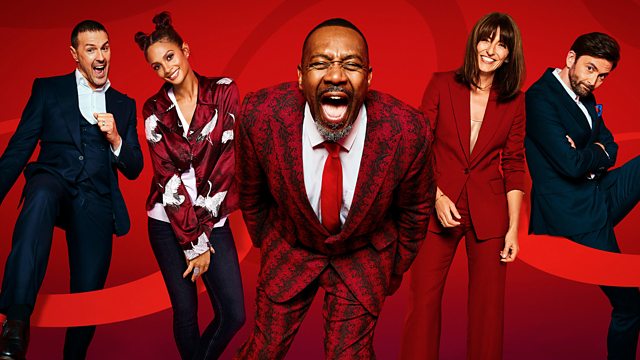 The UK’s biggest night of comedy and entertainment is back with big performances, comedy sketches, live studio surprises and inspiring stories.

The UK’s biggest night of comedy and entertainment is back, bringing together stars of stage, screen and the movies for an epic three-hour comedy special, entertaining the nation with hilarious sketches, live performances, big surprises and stunning music acts - all to raise much-needed cash for good causes at home and across the world.

Among the unmissable moments: the greatest disaster movie never made, featuring Keira Knightley at her wits end; the hosts of Top Gear facing interrogation by their most savage critics to date – and not one of them is old enough to get behind the wheel of a car; and a special message from Geraldine Granger, who takes on this year’s fundraising challenge to lip sync to her favourite song of last year, Juice by Lizzo.

The One Show have raided their cutlery draw to help soccer stars-turned-presenters Alex Scott and Jermaine Jenas take part in the world’s largest and longest Red Nose and Spoon Race. Fans of Fleabag and Normal People get a confessional close-up as the stars of the two shows meet for a mash up like no other. Comedian Tim Vine is on a mission to reward the men and women of the UK’s military forces by spreading a smile, and some of the UK’s best-loved comedians have just 24 hours to get together and perfect their opera voices under the watchful eyes of a world-famous mentor. Then they’ll perform live to the nation for one night only.

Paying homage to the video for Harry Styles’ single Treat People with Kindness, Comic Relief gets the nation up and dancing for Red Nose Day 2021. And Jack Whitehall hosts a Comic Relief Zoom meeting that quickly descends into chaos.

There's music from Gabrielle, The Proclaimers, the cast of Back To The Future: The Musical and a host of celebrities performing a Bridget Jones anthem, and as usual there are films highlighting incredible and inspiring stories of the people supported by some of Comic Relief’s projects in the UK and around the world.