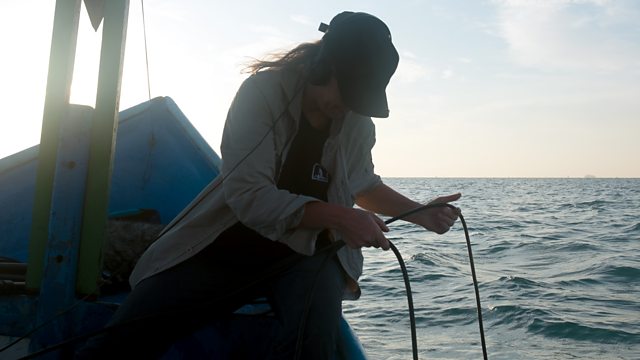 Listening to the Deep

Artist Jana Winderen transports us underwater to listen to the sonic wonders of the sea: melting ice booms, cacophonous coral, singing whales and fish that howl at the moon.

Although they cover more than 70% of the globe’s surface, most people have little idea about what our oceans sound like. In some traditions of science and storytelling, the sea was a place of deathly quiet - “The Silent World” - but of course there’s anything but silence down there. Sound actually travels further and faster in water than air.

Norwegian artist and composer Jana Winderen has been recording and sharing sounds of the deep for nearly two decades, dangling microphones from boats to uncover sonic wonders such as the tectonic boom of melting ice, singing whales, and fish that howl at the moon.

With a background in natural sciences and fine arts, Jana Winderen’s vast sound archive brings the oceans to life in a unique way: transporting us to Greenland, where the waters moan under the pressure of the climate emergency; plunging us into cacophonous Caribbean coral reefs; taking us to a Thai fishing community, who for generations have passed down traditional techniques for underwater hearing.

By listening closely one can perhaps look at the planet we live on with a new perspective.