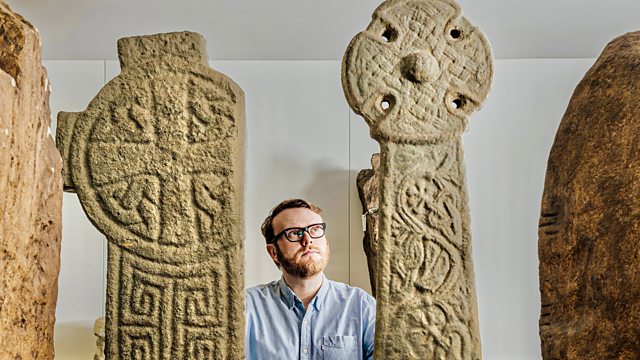 The Story of Welsh Art Series 1
Episode 1 of 3

Huw Stephens begins his history of Welsh art at a burial chamber on Anglesey, showing how it evolved from prehistoric rock carvings into depictions of the human form and the earliest Welsh portraits.

Huw Stephens explores what has long been a missing piece in the cultural story of Britain and indeed Wales itself – the story of Welsh art.

Huw starts his journey on the island of Anglesey where he steps inside a prehistoric burial chamber to witness Welsh art in its earliest form. He sees an exquisite example of Bronze Age artistry in the form of a gold cape, found by chance in a field in North Wales and now one of the prize exhibits in the British Museum.

Religious art delivers some of the most powerful and physically impressive pieces, from towering Celtic crosses standing sentinel in churchyards, to the sleeping figure of Jesse, hewn out of a single piece of oak but also delicately depicted in a rare surviving example of Welsh medieval stained glass.

As artists moved their gaze beyond religion, the rise of portraiture began, with Hans Memling delivering the first known oil painting of a named Welsh person, John Donne, in the 15th century.

See all episodes from The Story of Welsh Art