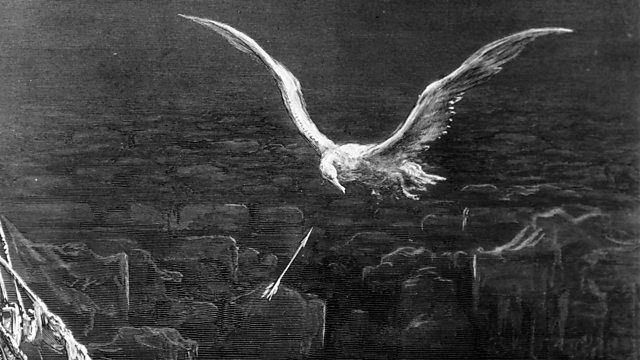 The Rime of the Ancient Mariner

Melvyn Bragg and guests discuss Coleridge's poem of a grim voyage in which a sailor shoots an albatross and is forced to tell the story of his crime forever.

In this 900th edition of the programme, Melvyn Bragg and guests discuss one of the best known and most influential of the poems of the Romantic movement. Samuel Taylor Coleridge (1772-1834) wrote The Rime of the Ancient Mariner in 1798 after discussions with his friend Wordsworth. He refined it for the rest of his life, and it came to define him, a foreshadowing of his opium-addicted, lonely wandering and deepening sense of guilt. The poem tells of a sailor compelled to tell and retell the story of a terrible voyage in his youth, this time as guests are heading to a wedding party, where he stoppeth one of three.

The image above is from Gustave Doré's illustration of the mariner's shooting of the albatross, for an 1877 German language edition of the poem

Tom Mole at the University of Edinburgh

James D. Boulger (ed.), Twentieth Century Interpretations of the Rime of the Ancient Mariner: a Collection of Critical Essays (Prentice-Hall, 1969)

Samuel Taylor Coleridge, The Rime of the Ancient Mariner, with Illustrations by Gustave Doré (Dover, 1970)

John Livingston Lowes, The Road to Xanadu: A Study in the Ways of the Imagination (first published 1927; Dyer Press, 2007)

Grant F. Scott, “’The Many Men so Beautiful’: Gustave Doré’s Illustrations to ‘The Rime of the Ancient Mariner’” (Romanticism, vol. 16, 2010)

John Spencer Hill, A Coleridge Companion: An Introduction to the Major Poems and the Biographia Literaria (Macmillan, 1984)

The Rime of the Ancient Mariner – Wikipedia