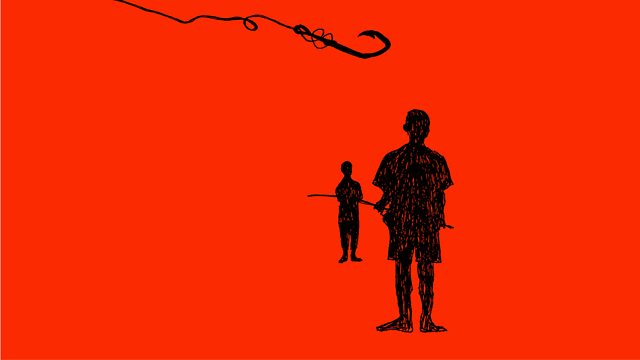 A powerful allegory of brotherhood, vengeance and fate. New Perspectives' stage version by Gbolahan Obisesan of the Man Booker shortlisted novel The Fishermen by Chigozie Obioma.

New Perspectives and Naked Productions present the Radio 3 debut of award-winning stage production of the 2015 Man Booker Prize-shortlisted novel The Fishermen by Chigozie Obioma, one of Africa's major new voices, in a new adaptation by Gbolahan Obisesan.

The play is set on the banks of the river in Akure, Nigeria. Two brothers, Ben and Obembe, reunite after eight years, and retell the story of their Igbo childhoods in southern Nigeria in the mid '90s. The fishermen are the two children themselves, alongside their two older teenage brothers. The boys become haunted upon hearing Abulu, the village madman’s, terrifying Macbeth-like prophecy. The story that follows charts a family tragedy. The death of their eldest brother, at the hands of the second eldest, who then flees, as prophesised by Abulu, sparks a terrible revenge that divides the two younger brothers.

"I cannot tell you enough how much I love the play adaptation of The Fishermen. Seeing the play last year was probably the biggest moment of my life so far outside of some very personal moments like my wedding. Gbolahan Obisesan and New Perspective's Jack McNamara distilled the book into two characters who move fluidly through different characters. They electrify the book and create such emotional atmosphere that I feared I would be hung at the stakes by the crowd afterwards for creating the story because of how many people were crying around me at the end of the show!" - Chigozie Obioma, 2019 extract from an interview in The Bookseller.

The Writer
Chigozie Obioma was born in 1986, Akure, Nigeria, and currently lives in the United States. He graduated from the University of Michigan with an MFA in Creative Writing and was a recipient of a Hopwood Award in fiction and poetry. He is now James E. Ryan Associate Professor of Literature and Creative Writing at the University of Nebraska-Lincoln.
His debut novel, The Fishermen, won the inaugural FT/Oppenheimer Award for Fiction, the NAACP Image Awards for Debut Literary Work,; the Art Seidenbaum Award for First Fiction (Los Angeles Times Book Prizes); and was a finalist for the Man Booker Prize 2015. The Fishermen is published in 27 languages, has sold more than 200,000 copies worldwide, and was selected for BBC World Book Club in 2019.

“Chigozie Obioma truly is the heir to Chinua Achebe”

The dramatist
Gbolahan Obisesan is a writer, actor and director, currently artistic director of the new Brixton theatre, opening in 2021 . He won the Jerwood Directors Award from the Young Vic for Sus in 2010. In 2011 Obisesan's play, Mad About the Boy, won Fringe First for best play. He directed four plays for ‘epic 66 books’ at the Bush Theatre which went on to tour the Unicorn Theatre, Royal Court Theatre and Bush Theatre. He was the only British writer for Rufus Norris's Feast at the Royal Court Theatre in 2013. He wrote and directed How Nigeria Became: A Story, and A Spear That Didn't Work, at the Unicorn Theatre in 2014. The play commemorated the centenary of Nigeria and was nominated as one of the Best Productions for Young People in the OffWestEnd Theatre Awards. He was made the Young Vic Genesis Fellow in 2015.

A New Perspectives and Naked Production for BBC Radio 3