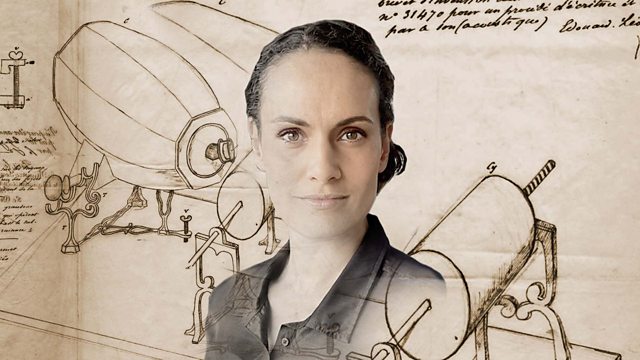 Mary-Ann Ochota meets the people who are bringing sounds of the past to life through the technology of the present.

For the vast majority of the 200,000 years humans have been on the earth, let alone its first 4.6 billion years of existence, the sonic story has been a fleeting, unrepeatable live show. Miss it, and you missed out. But now, thanks to the efforts of a dedicated cohort of scientists, historians and musicians, some of the world's most weird and wonderful ‘lost sounds’ are making a comeback. Mary-Ann Ochota meets the people who are bringing sounds of the past to life through the technology of the present.

Professor Julia Clark of Texas University takes issue with Hollywood’s presentation of dinosaur sounds and has been reconstructing the sound of a Tyrannosaurus Rex. She’s identified a voice box in an early bird fossil, revealing clues about vocal structures in dinosaurs. By studying crocodilians, she has a partial glimpse at dinosaur sound-making. Combining them together, then adjusting the frequency to match the size of the massive T-Rex, Julia has given us a better understanding of how the world’s largest land carnivore may have sounded.

Domenico Vicinanza is a scientist and music composer at Anglia Ruskin University who is pioneering data sonification: a computer modelling process that turns data into sounds to give voice to inaudible vibrations from the Earth’s atmosphere. We hear about his latest project creating music from infrasonic measurements captured at Yellowstone National Park in America. Oscillations of the Earth's eruptions are translated into a frequency range we can actually hear, as flute music pieces.

It wasn’t until the 19th century that we first began to capture sounds, but those early efforts were also lost to time, until recently. Patrick Feaster and David Giovannoni have been at the forefront of discovering the oldest sound recordings of the human voice. When they began, the earliest sound anyone could hear was from 1888. In 2008 they pushed that date back 28 years and in so doing showed that it wasn’t the American Thomas Edison who first recorded sound on his phonograph as previously thought, but the Frenchman Édouard-Léon Scott de Martinville, who made the world's first recordings of airborne sounds in Paris on a machine he called a phonautograph.

Finally, Emily Thompson is a member of a growing community of historians who’ve turned their attention to the aural landscape, interrogating the materiality and texture of our sonic worlds. Emily explains how she brought alive the soundscape of 1920s New York City through a multimedia database of audio recordings, video and documented noise complaints from the Roaring Twenties, breathing new life into a lost world.

Special thanks to the University of South Carolina and the Municipal Archives, City of New York for use of their archives. To hear more sounds from the Roaring Twenties, visit nycitynoise.com. Cover Image: www.firstsounds.org