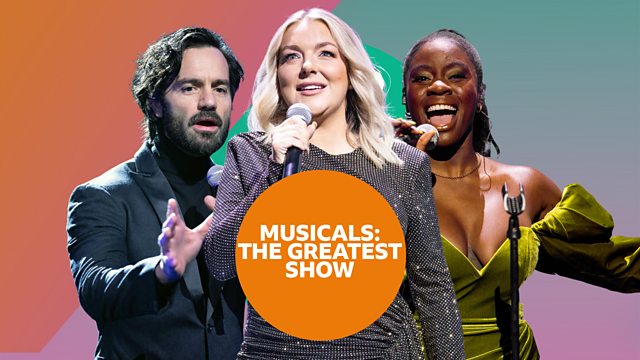 Recorded at the London Palladium with the BBC Concert Orchestra and hosted by multi award-winner Sheridan Smith, BBC Radio 2 invites you to a very night at the musicals. Featuring a glittering cast of UK and international stars performing the biggest songs from the shows.

Hits from classic shows such as The Phantom of the Opera, MAMMA MIA!, Dreamgirls and Wicked are joined by songs from newer productions, including Hamilton, SIX and Dear Evan Hansen. Amanda Holden joins Sheridan for a spine-tingling duet from Chess; Michael Ball belts out Hairspray’s ‘You Can’t Stop the Beat’ and there’s even a sneak-peek at a beautiful new track from Andrew Lloyd-Webber’s next big show, Cinderella.

“Musicals: The Greatest Show” is the centrepiece of "Radio 2 Celebrates Musicals" - three days of programmes featuring the music of stage and screen for people to enjoy from the comfort of their own homes.

A TBI Media production for Radio 2 and BBC One.

See all episodes from Musicals: The Greatest Show