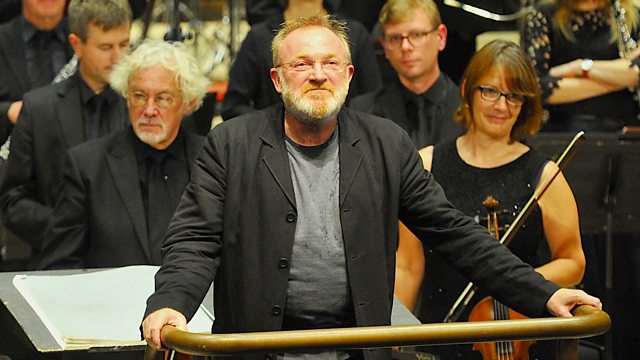 Martyn Brabbins conducts the BBC National Orchestra of Wales in a programme of British music, with soloists Steven Hudson on oboe and Jess Gillam on saxophone.

Live from BBC Hoddinott Hall in Cardiff, Nicola Heywood Thomas presents a concert of British music by three eminent composers: Benjamin Britten, Colin Matthews and Richard Blackford. Blackford's sweeping oboe concerto, The Better Angels of Our Nature, opens the programme, written in 2014 and inspired by Abraham Lincoln's inaugural address, from which it gets it's title. The concert then heads back in time to Britten's Opus 1, his Sinfonietta, which he wrote while still a student at the Royal College of Music. Despite being only 18, the engaging and original piece belies his early years and certainly marked him out for the great things to come in his career. The Sinfonietta was dedicated to Britten's most inspiring teacher, Frank Bridge, and so it is apt that the final two works should be from someone who Britten influenced greatly, his assistant, Colin Matthews. The first piece, Matthews' arrangement of Britten's Temporal Variations, was made in 1994 for oboe and string orchestra, and is heard tonight in a version for alto saxophone and strings. The concert concludes with a work of the same year titled ...through the glass, a thought provoking work for chamber ensemble loosely based on Edmund Blunden's poem The Midnight Skaters.

Blackford: The Better Angels Of Our Nature
Britten: Sinfonietta, Op 1