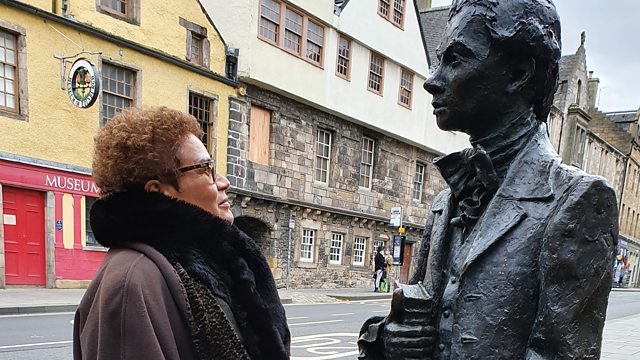 Scots Makar Jackie Kay looks at the lives of some of the extraordinary, and often overlooked, poets that Scotland has produced and how they have told, and continue to tell, our nation's story.

Robert Burns' story has been told over and over, year after year, and with good reason. But in this programme, Scotland’s national poet Jackie Kay looks beyond Burns to some of the other extraordinary, and often overlooked, poets Scotland has produced. She brings them out from Rabbie's shadow to see how they have told, and continue to tell, our nation's story.

She looks at some of the poets who have influenced her including Robert Fergusson, Margaret Tait, Liz Lochhead and Norman MacCaig, and meets writers including Val McDermid, James Robertson, Hannah Lavery and Kevin MacNeil, to learn more about the overlooked poets and hear some of their stunning works.

The interrogation of identity and themes of belonging have always been at the heart of Kay’s work, and it’s a theme that has resonated with Scottish poets for centuries. Jackie candidly shares some painful stories and events from her past that have shaped her life and work, and this honest film never shies away from confronting the shameful issues of racism that stalked her growing up in Scotland.

Beyond Burns highlights the fact that, for a small nation, Scotland undeniably punches above its weight in poets. It also highlights the nations' breathtaking land and seascapes from the Isle of Lewis, Dunbar, Biggar and more.