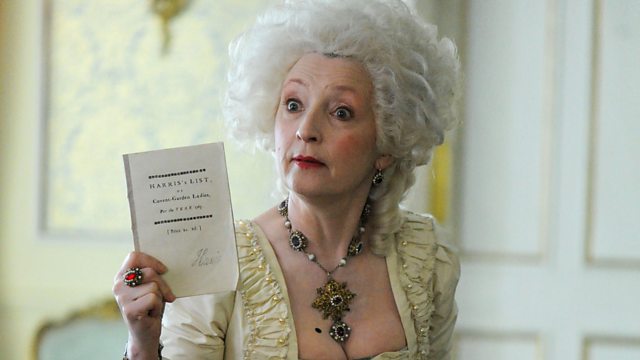 Shahidha Bari hosts a conversation organised in partnership with the Royal Society of Literature to look at the pros and pitfalls of translating history into TV drama and film.

Harlots puts on TV the stories of working women detailed in 1757 in Harris's List of Covent Garden Ladies. Historian Hallie Rubenhold has researched their history + Moira Buffini has translated that into scripts. They join Shahidha Bari alongside legal historian Laura Lammasniemi in a conversation organised in partnership with the Royal Society of Literature to look at the opportunities and the pitfalls in creating historical dramas and what we know and don't know about the lives of sex workers in the eighteenth century.

Hallie Rubenhold's book is called The Covent Garden Ladies. Her book The Five; The Untold Lives of The Women Killed by Jack the Ripper winner of the Baillie Gifford Prize for Non-fiction has also been optioned as a drama series. Her book Lady Worsley's Whim became the TV drama The Scandalous Lady.
Moira Buffini's scripts include Harlots and the films The Dig which reimagines the events of the 1939 excavation of Sutton Hoo; Viceroy's House and Jane Eyre. Her plays include wonder.land; Handbagged and Dinner.
Laura Lammasniemi is Assistant Professor in the Warwick University Law School. She's currently a Leverhulme Fellow working on a project "Narratives of sexual consent in criminal courts, 1870-1950". This project focuses on how the concept of 'consent' has been understood historically in different contexts such as rape, age of consent/youth, and BDSM.

Witchcraft, Werewolves and Writing the Devil

James Baldwin and Race in the USA