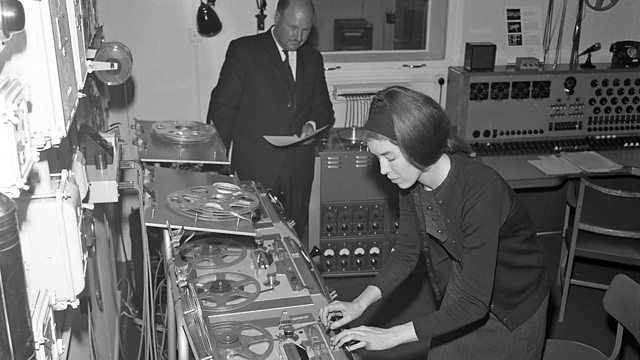 The actor Caroline Catz chooses the composer Delia Derbyshire, who is best known for her work at the BBC Radiophonic Workshop, where she realised the theme tune to Doctor Who.

The actor Caroline Catz chooses Delia Derbyshire, the musician and composer who is best known for her work at the BBC Radiophonic Workshop where she realised the theme tune to Doctor Who. With Dr David Butler from the University of Manchester who looks after Delia's archive.

Delia was born in Coventry in 1937 and describes her earliest recollections of sound as the sound of the German blitz and the air-raid sirens. She studied music and maths at Cambridge and joined the BBC Radiophonic Workshop where she could create sounds that had never existed in the world before. Her 'realisation' of Ron Grainer's theme tune to Doctor Who brought both her and the Workshop to greater prominence, but she later left the BBC and London and moved to Cumbria where she worked on a series of projects, as well as being briefly employed as a radio operator at the Gas Board. She was a pioneer of sound and her work is celebrated each year by Delia Derbyshire Day. Caroline was terrified by the Doctor Who theme tune as a child but fascinated by the woman, and later discovered tracks like 'Ziwzih Ziwzih OO-OO-OO' and 'Blue Veils and Golden Sands' from Radiophonic Workshop mix tapes. The discovery of 267 tapes in Delia's attic provided another portal into the extraordinary sonic world of Psyche-Delia and the mystery surrounding both how she created her music and the choices she made in life provided the inspiration for Caroline's film 'Delia Derbyshire: The Myths and the Legendary Tapes' in which she plays the lead. Delia appears in archive recordings to give Matthew Parris his first taste of a Wobbulator.