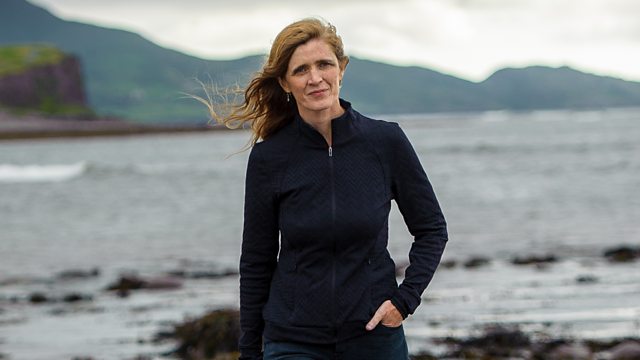 Samantha Power, author and former US ambassador to the UN, shares the eight tracks, book and luxury she would take with her if cast away to a desert island. With Lauren Laverne.

Samantha Power was the USA's youngest ever ambassador to the UN, during President Barack Obama’s second term, and is a writer and academic. She has just been invited to join president-elect Joe Biden's administration.

Samantha was born in London but grew up in Ireland. At the age of nine, she moved to the US with her mother and younger brother following the breakdown of her parents’ marriage.

Her first ambition was to be a sports broadcaster, but watching live footage of events in Tiananmen Square in 1989 led her to change course and she became a war correspondent instead, reporting on the conflict in Bosnia in the early 1990s. After returning to the US, she wrote a Pulitzer Prize-winning book in which she examined what she saw as America’s repeated reluctance to confront genocide in the 20th century.

In 2013 she was appointed ambassador to the UN. She stepped down in 2017 and became professor of global leadership, public policy and human rights at Harvard. Shortly after this edition of Desert Island Discs was recorded, she accepted the role of Administrator of the US Agency for International Development.

DISC ONE: Dancing Queen by ABBA
DISC TWO: Morning Has Broken by Cat Stevens
DISC THREE: Thousands Are Sailing by The Pogues
DISC FOUR: Crazy by Seal
DISC FIVE: Boots of Spanish Leather by Mandolin Orange
DISC SIX: Why? (The King of Love is Dead) by Nina Simone
DISC SEVEN: Tonight Will Be Fine by Teddy Thompson
DISC EIGHT: A Million Years by Alexander