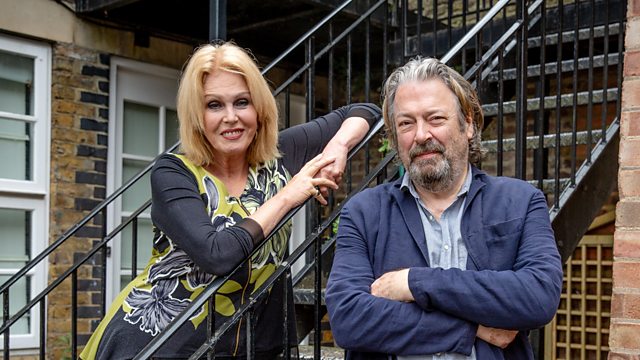 Episode 1 - Just the Way You Are

Conversations from a Long Marriage Series 2
Episode 1 of 6

Joanna Lumley and Roger Allam star as the couple who’ve been married ‘for ever’ but are still passionate about each other. Today Joanna’s making New Year resolutions – for Roger.

Conversations from a Long Marriage is a two-hander comedy, starring Joanna Lumley and Roger Allam, as a long-married couple who met in the Summer of Love and are still passionate about life, music and each other. We listen to – and empathise with - their dangling ‘conversations’ covering everything from health scares, jealousy and confessions, to TV incompatibility and sourdough bread.
In episode one, Roger gives Joanna a masterclass in dishwasher stacking while Joanna instructs him on how to wave goodbye to departing guests. As the turbulent year turns, Joanna makes some New Year Resolutions - for Roger - and suggests their marriage needs a re-boot’ . ‘Out the door?’ is his response.
Written by Jan Etherington. Produced and directed by Claire Jones.
A BBC Studios Production.

Series 1 received excellent reviews including:
‘Sublimely funny, touching series. Joanna Lumley and Roger Allam have had illustrious acting careers but can they ever have done anything better than Jan Etherington’s two hander? This is a work of supreme craftsmanship.’ Simon O’Hagan. RADIO TIMES
Conversations…. Is the delicious fruit of Jan Etherington’s experience of writing lots of TV and radio comedy (previously with husband Gavin Petrie), blessed by being acted by Joanna Lumley and Roger Allam. They are lifelike and likeable. Comedies about likeable people are not common. Treasure this one, produced by Claire Jones.’ Gillian Reynolds. SUNDAY TIMES