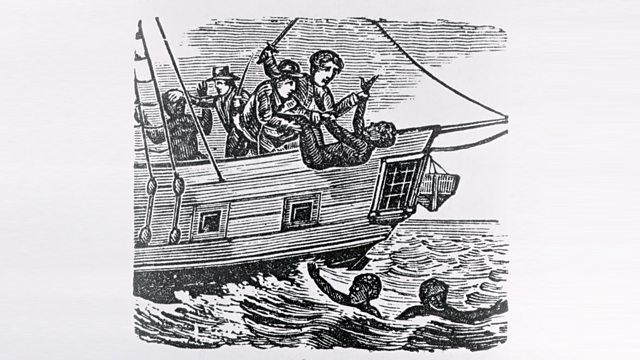 Melvyn Bragg and guests discuss the drowning of 132 enslaved Africans, purportedly as there was not enough drinking water to go round. The owners profited; nobody was prosecuted.

Melvyn Bragg and guests discuss the notorious events off Jamaica in 1781 and their background. The British slave ship Zong, having sailed across the Atlantic towards Jamaica, threw 132 enslaved Africans from its human cargo into the sea to drown. Even for a slave ship, the Zong was overcrowded; those murdered were worth more to the ship dead than alive. The crew said there was not enough drinking water to go round and they had no choice, which meant they could claim for the deaths on insurance. The main reason we know of this atrocity now is that the owners took their claim to court in London, and the insurers were at first told to pay up as if the dead slaves were any other lost goods, not people. Abolitionists in Britain were scandalised: if courts treated mass murder in the slave trade as just another business transaction and not a moral wrong, the souls of the nation would be damned. But nobody was ever prosecuted.

The image above is of sailors throwing slaves overboard, from Torrey's 'American Slave Trade', 1822

Bronwen Everill
Class of 1973 Lecturer in History and Fellow at Gonville & Caius College, University of Cambridge

Bronwen Everill at the University of Cambridge

Jake Subryan Richards at the London School of Economics

Granville Sharp (ed. Prince Hoare), Memoirs of Granville Sharp, Esq. Composed from His Own Manuscripts and Other Authentic Documents in the Possession of His Family and of the African Institution (first published 1820; Cambridge University Press, 2014)

Randy J. Sparks, Where the Negroes are Masters: An African Port in the Era of the Slave Trade (Harvard University Press, 2014)

James Walvin, The Zong: A Massacre, the Law and the End of Slavery (Yale University Press, 2011)