BBC One
My Family, The Holocaust and Me
Main content 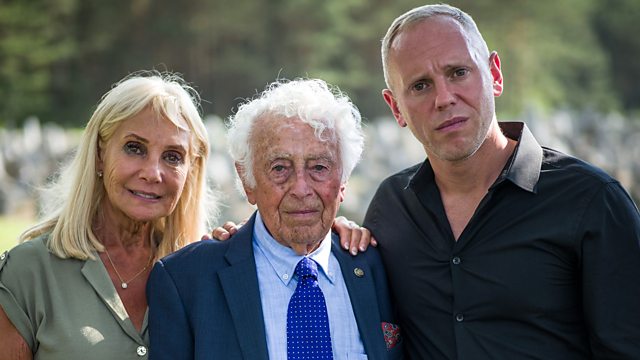 My Family, The Holocaust and Me Series 1
Episode 2 of 2

Robert Rinder continues his journey, meeting a woman whose mother was arrested as a child by the Nazis, a man whose uncle was transported to Belsen and the last survivor of the Treblinka death camp.

Robert Rinder continues his journey, meeting Noemie Lopian, whose French mother was arrested as a child by the Nazis. Noemie wants to follow in her mother’s footsteps to understand what happened and how her mother survived. In an extraordinary scene she meets the grandson of the man who hid her mother and her mother’s siblings in a chicken shed in his garden during round-ups of Jews in the town of Saint-Junien. Noemie also learns of the incredible sacrifice and courage of a young female French Resistance fighter who saved her mother’s life.

Having discovered the fate of his grandparents in episode one, Bernie Graham is desperate to know what happened to his uncle Bernhard, after whom he is named, and who he believes committed suicide in Dachau concentration camp. To unravel what happened to his uncle, Bernie travels to Dachau, where he finds out that his uncle fell ill and died after a horrendous journey there. Despite the dark truths that Bernie uncovers, he hopes that we can learn from these terrible events.

Robert’s mother's family were also impacted by the Holocaust, and he knows that his Polish grandfather’s parents and siblings died in Treblinka death camp in Nazi-occupied Poland. Robert travels with his mother to Treblinka to discover how her grandparents, aunts, uncle, great-aunts and great-uncle were murdered. They meet the last survivor of Treblinka, 92-year-old Leon Rytz, who tells his harrowing story. The three of them say Kaddish together, the Jewish prayer of remembrance for those who have died.

See all episodes from My Family, The Holocaust and Me