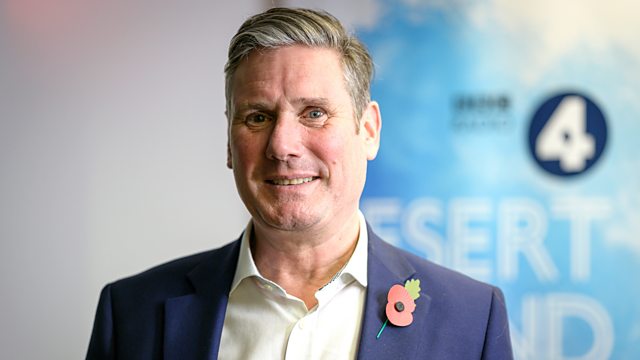 Sir Keir Starmer, leader of the opposition, shares the eight tracks, book and luxury he would take if cast away to a desert island. With Lauren Laverne.

Named after Keir Hardie, a founding father of the Labour party, he was elected leader seven months ago in the wake of Labour’s heavy defeat in the 2019 general election.

He stood for, and won, the leadership on a platform of party unity but his resolve has been tested recently by factionalism and infighting. Following the publication of the highly critical Equality and Human Rights Commission report, he has vowed to tackle the issue of anti-Semitism in the party and heal division within the party ranks.

He grew up in Oxted, Surrey, the son of a toolmaker and a nurse. His formative years were clouded by his mother’s debilitating illness: she suffered from Still’s disease, an autoimmune disease, and as a young boy he spent a lot of his time at her hospital bedside.

His political awakening came at 16 when he joined the East Surrey Young Socialists and later he was one of the editors of the radical magazine Socialist Alternatives. After university he had a high-profile career as a human rights lawyer representing prisoners on death row and advising the new Police Service of Northern Ireland which was set up as part of the Good Friday Agreement. In 2008 he changed tack and became the director of Public Prosecutions before switching to politics. In 2015 he was elected to the House of Commons as MP for Holborn and St Pancras.