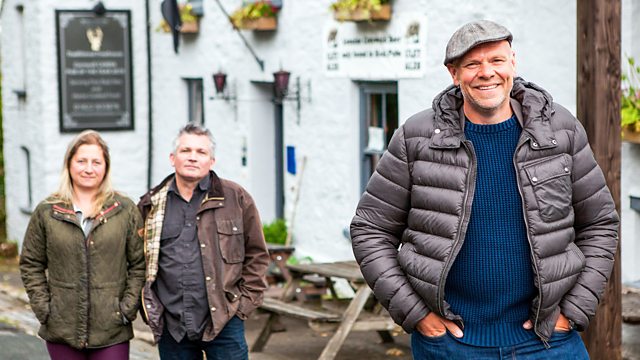 Tom urges a pub to exploit its stunning location. He takes up the case of landlords struggling with inflated beer prices. And he learns about Jamaican-run pubs in south London.

For the last 20 years, pubs have been closing down at an alarming rate. Concerned by a crisis in the industry he loves, Tom Kerridge sets out on a mission to revive struggling pubs.

His journey begins at The White Hart in the tiny village of Chilsworthy, Cornwall. This 300-year-old freehouse is the only pub in the village and the only community resource left since the village shop, school and church were converted into housing.

Publicans Amy and Ian sold their house three years ago to buy the pub. It is well supported by the local community and was named CAMRA’s Cornish Pub of the Year 2019. Despite this, Amy and Ian are barely breaking even - a familiar story for landlords of rural pubs across Britain. Local trade isn’t enough to secure the pub’s long-term future, and if it fails, the village would lose its most valued asset.

Tom believes that if Amy and Ian were prepared to open up the bar and dining room to the stunning views across the Tamar Valley, the White Hart would attract customers from further afield while remaining the beating heart of the community. It would involve costly and disruptive building work, but the couple decide to proceed with the plan. Despite the dust and rubble, they are determined to keep the pub open for their loyal regulars.

The second pub Tom wants to help sits on top of a hill on the edge of Stroud, a market town in Gloucestershire. The Prince Albert is a popular meeting place for fans of live music and real ale. The pub’s tenant landlords, Lotte and Miles, are exceptional hosts, and the pub is regularly full so Tom is surprised to hear they are struggling. Is it because they put their customers’ happiness and welfare above profit?

With no food on sale at The Prince Albert, profit must come from the sale of beer. Tom urges Lotte and Miles to raise their beer prices for a trial period, but there is a problem with this plan. The price they buy their beer is already higher than it would be on the open market because they are subject to what is known as a beer tie. This is a centuries-old system under which tenant landlords must buy beer from the company which owns the building and often at inflated prices. If Lotte and Miles raise their prices as Tom suggests, the Prince Albert could become the most expensive pub in Stroud.

Tom travels into London to find a third pub to support. Times have been tough for the capital’s pubs, with an average of 80 closing every year since 2000. Tom arrives in the south London neighbourhood of Nunhead to meet Lana, leaseholder at The Golden Anchor. She is struggling to pay the bills, and unless she can pull in more punters, The Golden Anchor will close. Tom learns more about the pub when he joins a game of the dominos with the regulars.

Tom began his journey thinking that a successful pub depends on the food and drink on offer and a welcoming atmosphere. But, just two months in, he realises it is the amazing people who run our pubs that make them so loved and cherished by communities. And supporting the efforts of brilliant publicans is what is most needed for their survival.

See all episodes from Saving Britain’s Pubs with Tom Kerridge