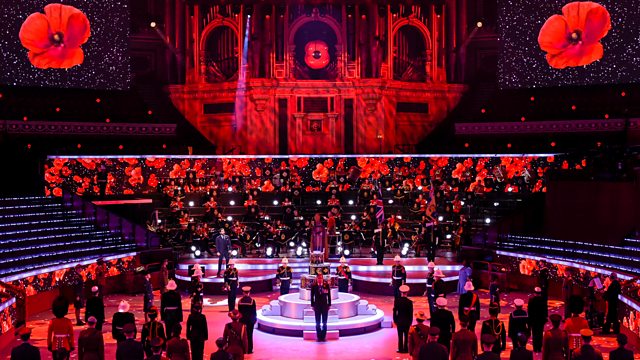 Huw Edwards presents the Royal British Legion's annual Festival of Remembrance, with the Prince of Wales and the Duchess of Cornwall in attendance.

Huw Edwards presents the Royal British Legion's annual Festival of Remembrance from the Royal Albert Hall in London. In this socially distanced event HRH the Prince of Wales and the Duchess of Cornwall will pay special tribute to the contributions of Her Majesty’s armed forces as well as the nursing profession.

2020 marks 75 years since the end of the Second World War, and this will be reflected through veterans’ first-hand experiences of service in Europe and the Far East. Wartime testimonies will be read by Oscar-nominated actor Samantha Morton, star of The Sister Nina Toussaint-White, Eastenders actor Kara-Leah Fernandes and West End star Julian Ovenden. The nation’s most well-known veteran, Captain Sir Tom Moore, talks to Huw about his inspirational achievements and what remembrance means to him.

The event will culminate in the act of remembrance, and as the petals fall in the Royal Albert Hall, the festival will pay tribute to all victims of war and remember those who made the ultimate sacrifice to defend our freedoms and way of life.

See all episodes from Royal British Legion Festival of Remembrance