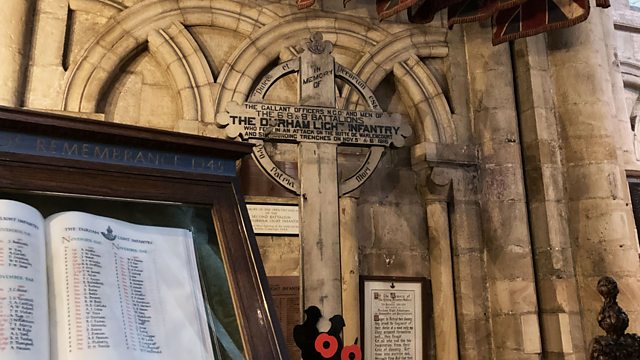 Alec Ryrie argues that the Second World War is our modern sacred narrative, as well as underpinning our collective sense of what constitutes good and evil.

Alec Ryrie argues that the Second World War is our modern sacred narrative, as well as underpinning our collective sense of what constitutes good and evil.

Alec is Professor of the History of Christianity at Durham University, and in this programme he will blend news archive with fiction, film and serious works of history and commemoration, to chart the development of this new sacred narrative.

He'll show how Adolf Hitler became the most potent moral figure in our culture and Nazism became the reference point for good and evil; how fictional portraits such as Sauron, Darth Vader and Voldermort echo the notion of Hitler; and why in a society where religious symbols have less potency than they once did, no visual image packs the same emotional punch as a swastika.

Alec will hear from Simon McCallum, BFI National Archive Curator, about how wartime and post-war film handled WW2. Dr Debra Ramsay will explain the interplay between Cold War politics and portrayals of Germany.

Daniel Truhitte, who played the most famous fictional Nazi of all time - Rolf in the Sound of Music - tells Alec how he prepared for, and improvised, the film's famous final scene. And Dr. Dimitra Fimi, co-director for Fantasy and the Fantastic at the University of Glasgow analyses how the evil in Tolkien's world was influenced by the Nazis.

Alec also speaks to Michaela Kuchler, President of the International Holocaust Remembrance Alliance, to Professor Gavriel Rosenfeld, about the way in which the Holocaust came to be a defining characteristic of the Second World War, to YouTuber Jackson Bird about evil in Harry Potter, and to Black Lives Matter activist Imarn Ayton about Churchill.