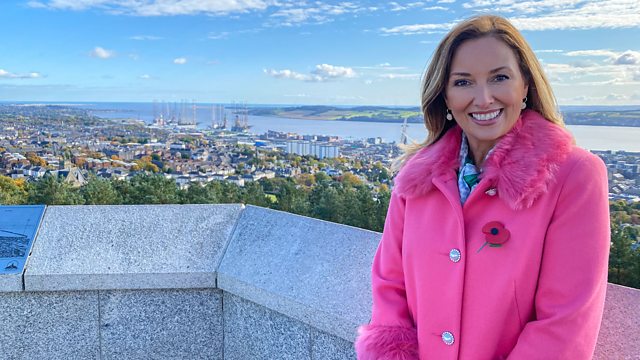 Claire McCollum visits Dundee, home of the Beano and the Dandy, to see how its comic book tradition inspired a new version of the Bible. With performances by Barbara Dickson and Cliff Richard.

Claire McCollum is in Dundee, where the River Tay meets the North Sea. It’s the first time Claire has returned to the city since studying at the university, and she takes in the sights, both old and new, from the top of the hill known as Dundee Law. She discovers why Dundee has historically been famous for textiles, confectionery and publishing – jute, jam and journalism! - and also finds out about its religious history and how Dundee played a crucial role in the Scottish Reformation.

Radzi Chinyanganya also has connections with Dundee. His mother hails from the city, and he makes a very personal visit to the Catholic church where he was baptised. From there he heads north to the Compass Christian Centre, set in the stunning scenery of Glenshee. For over 50 years, the centre has been providing outdoor activities for young people from Dundee and beyond and sharing the story of Jesus. Radzi joins a young volunteer on the high rope course to hear about the impact the centre has had on her life and faith.

Dundee has many famous sons and daughters, but perhaps none more so than the characters of the comic books produced in the city, which include the Beano, the Dandy and The Broons. We meet Christian graphic artist and novelist Siku, who grew up reading those comics and went on to produce an entire Bible in the manga cartoon style.

Back in Dundee, Claire meets local parish nurses who combine their medical skills with their faith to help people on the road to recovery from addiction. She meets one man whose life was turned around through becoming a Christian and receiving help from the parish nurses.

See all clips from Dundee (4)