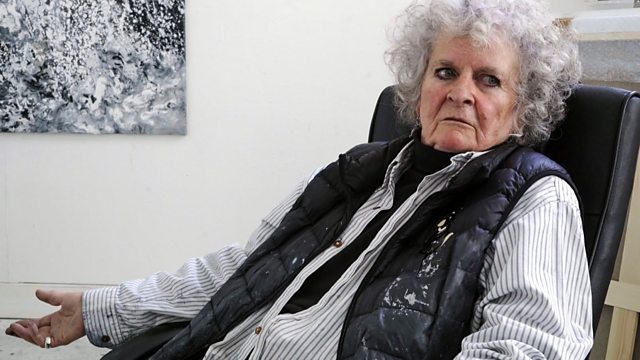 In a definitive and moving film to mark her 75th birthday, artist and national treasure Maggi Hambling tells her story while working on a mysterious black canvas.

In a definitive and moving film to mark her 75th birthday, artist and national treasure Maggi Hambling tells her story while working on a mysterious black canvas.

Maggi is both a comic extrovert and an intensely private artist, seen parading in a feather boa and fish nets or on television sporting a moustache. But now she mostly prefers the rural Suffolk of her childhood. It is here, for the first time, she has allowed cameras access to her studio, talking candidly to film-maker Randall Wright during breaks from work. Others offer their insights - her partner and fellow artist Tory Lawrence and much-loved friends, including art writer James Cahill and renowned artist Sarah Lucas.

As her trust in the documentary project grows, Maggi reveals her recent Laugh paintings, exploring her fascination with an expression that seems on the edge of tears. So much of her work finds beauty that is both poignant and unsettling. Her much-admired wave paintings have the majesty and restorative power of nature and yet threaten. Maggi’s major work War Requiem, inspired by Britten, presents the violence of war as terror-inspiring and awesome. Now she confronts man-made environmental disaster in the same tragic mode - her love for animals mediated by the shock that their beauty may not prevent extinction.

Finally, Maggi Hambling completes her new painting on a black canvas. Without giving too much away, the powerful image reveals a formative childhood memory. At 75, Maggi, in a morose mood, sometimes wonders at the futility of life, but she still battles every day to immortalise the memory of love.