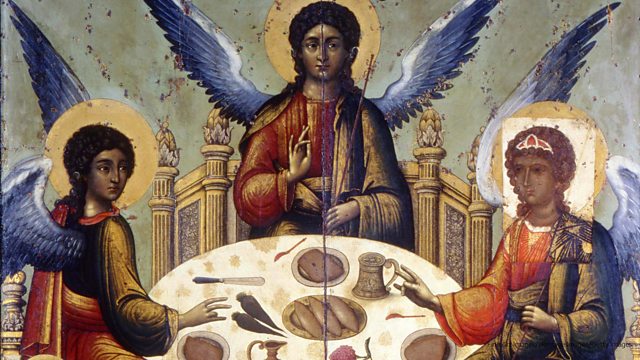 Roy Jenkins talks to three people for whom hospitality is a key element of their religious life, including one person who even gave their house keys to a former burglar.

"To be fair, I didn't know he was a burglar at the time!" Would you let a burglar stay in your house? Would you even give him the keys? That's what one of Roy Jenkin's guests did in the name of hospitality! The plight of the hospitality industry is much in the new, and in this context hospitality is largely a commercial transaction. But for many people of faith, showing unconditional hospitality, making room for the stranger, is a fundamental expression of their religion, and a demonstration of human compassion. Roy Jenkins talks to Rabbi Monique Mayer of Cardiff Reformed Synagogue; to Ben Sutton, a member of Llanrhian Church in Pembrokeshire, who has volunteered at the Moria refugee camp on the island of Lesbos; and to writer Andrew Graystone, who has offered hospitality to numerous guests, including asylum seekers...and a burglar!