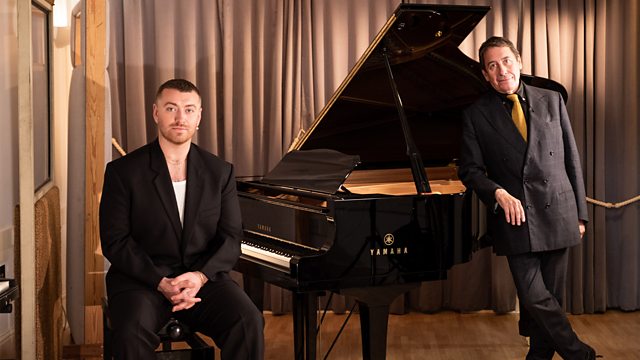 Jools chats to global pop superstar Sam Smith and discovers their musical journey. With performances by Jamaican artist Koffee and Shirley Collins, a veteran of the British folk scene.

This week, Jools chats to global pop superstar Sam Smith and discovers their own musical journey, loves and influences, illustrated by a diverse selection of clips from the extensive Later... archive. Smith comes to Jools’s studio ahead of the release of their third album Love Goes, written over the last two years, which Smith refers to as 'the most experimental time of my life, personally but also musically'. Smith first appeared on Later... in 2013 with dance duo Disclosure, making their solo debut the year after. They have had a meteoric rise to fame over the past decade, with two number one albums In the Lonely Hour and The Thrill of It All, seven number one singles and a heaving awards cabinet of Brits, Grammys and an Oscar for their James Bond theme.

Making her debut on the show this week is Jamaican artist Koffee, who is part of the wave of musicians reimagining the positive vibes of roots reggae. She made history this year taking home the Grammy for best reggae album for her Rapture EP, making her the first woman and youngest recipient of the award. She performs from Bob Marley’s famed recording studio Tuff Gong in the island’s capital Kingston.

And performing in Jools’s studio is Shirley Collins, a veteran of the British folk scene, who is widely acknowledged as one of the greatest female singers of the genre and a key voice in the English folk revival of the sixties and seventies. With a musical career spanning over 60 years, Collins released her ninth solo album Heart’s Ease back in July to huge critical acclaim, with reinterpreted traditional songs from England and the USA alongside new numbers.