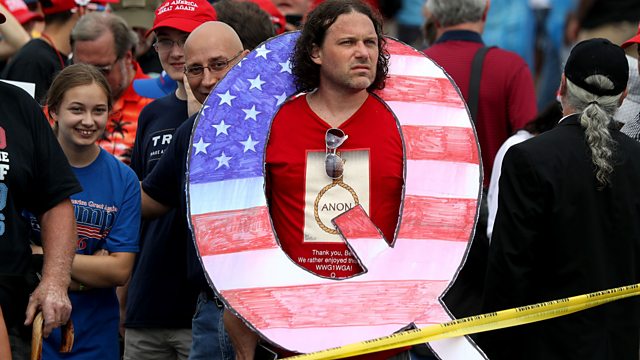 How conspiracy theories hijacked the news

"Biden's hidden earpiece" is the latest theory to cross from the fringes to the mainstream.

Ahead of the first US presidential debate, right-wing commentators and Donald Trump's own campaign team, speculated that Joe Biden was using a hidden earpiece. Amol Rajan asks how conspiracy theories that previously only existed on the fringes of the internet now regularly cross over into mainstream media.

Guests: Angie Drobnic Holan, editor in chief of PolitiFact, Professor Nancy L. Rosenblum, co-author of A Lot of People Are Saying: The New Conspiracism and the Assault on Democracy, Mike Thompson, chief content director at WOSU in Ohio, and Marianna Spring, BBC reporter.

Bake Off rises out of lockdown