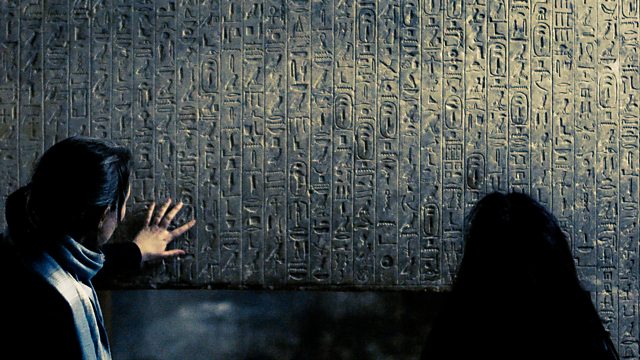 From Pictures to Words

The Secret History of Writing Series 1
Episode 1 of 3

The hunt for the origin of writing reveals the link between ancient Egyptian hieroglyphs and the letters we use every day.

We take it for granted, but every time we pick up a pen, we are employing the most powerful technology ever invented: the technology of writing. The invention of writing about 5,000 years ago made civilisation itself possible, and every innovation of the modern world is based on the foundation of the written word. But how and where did writing begin, and who began it? In From Pictures to Words, the first of three films about the history of writing, we uncover the hidden links between all the diverse writing systems in use today and trace the origin of our own alphabet to a turquoise mine in the Sinai Desert and a man riding a donkey whose name was Khebded.

Writing is a recent innovation. Our species has existed for about 300,000 years, and for all but the last 5,000 of them, people had to record and transmit vital knowledge without the aid of writing. At the Moon Dreaming site in the Northern Territory of Australia, Yidumduma Bill Harney, an elder of the Aboriginal Wardaman people, explains how Aboriginal culture has been transmitted down the generations orally, without the need to write anything down. So, why did people eventually feel the need to make permanent records in visual form?

According to Irving Finkel, an Assyriologist from the British Museum, it was in Mesopotamia, modern-day Iraq, where the need for record-keeping was first felt. Here, about 5,000 years ago, the Sumerians developed the first city states. The city dwellers depended for their sustenance on taxing the surrounding countryside, and Irving produces a clay tablet from this period that is the distant ancestor of today’s spreadsheet: a grid of boxes ruled into the clay, with symbols that represent numbers, and small stylised pictures that represent commodities, such as an ear of barley. These so-called pictograms would be the basis for the first writing systems, and so we owe writing to the first accountants and tax inspectors.

But the language of accountancy is limited. To represent the full vocabulary of the Sumerian people would require a key conceptual leap, a way to use pictures to represent not things but sounds. This is what Irving dubs the giant leap for mankind, something called the Rebus Principle: the idea is that a picture of an ear of barley can represent barley, but it can also be used to represent the sound of the word barley in Sumerian, which is pronounced ‘sheh’. Thus, the word ‘sheh-ga’, which means ‘beautiful’, can be represented by the pictogram of an ear of barley, followed by the stylised picture of a cow’s udder, which stands for milk, pronounced ‘ga’ in Sumerian.

The Rebus Principle is the key that unlocked writing for all the peoples of the ancient near east. Egyptian hieroglyphs, which developed in the same period, are also based on the same principle. The earliest known complete Egyptian text is found beneath a pyramid near Cairo, inscribed on the walls of the tomb of Pharaoh Teti. The Pyramid Texts are a series of elaborate magic spells, designed to raise Teti to eternal life. Hieroglyphs are indeed magic, because like all writing, while they may not be able raise the dead, they do allow them to speak.

In fact, the Rebus lies behind all the ancient writing systems of the world. The earliest known Chinese writing is found inscribed on bones and turtle shells from 3,500 years ago. Chinese is a picture-based script that uses the Rebus Principle to represent sounds with stylised pictures. The same is true of Mayan glyphs, a writing system that developed in Central America about 2,600 years ago. The similarities between these scripts is striking. Is this evidence of a common root for all writing?

In essence, the Rebus Principle is simply a sort of pun, something that could have occurred to a child. Irving Finkel believes that it was invented many times, as a natural expression of a common human sense of humour! The similarities between ancient writing systems are simply due to the fact that we all share the same human mind.

But today, most people write using alphabets – simple scripts with just a few dozen symbols that seem to have no connection to pictures. Here the story is different, because the alphabet was only invented once. In the company of archaeologist Pierre Tallet, we travel to the Sinai to an ancient Egyptian temple perched high above the desert. This is the place where the cultural exchange between Egyptian scribes and illiterate Canaanite migrant workers created a new kind of script. This script also used the Rebus Principle, but in a radically simpler way, adapting hieroglyphic pictograms to represent the sounds of the Canaanite tongue.

Almost every alphabet in use today, from Arabic to the Latin alphabet, can trace its origins to this script. Our letters do not look like pictures, but in fact in almost every word we write lie hidden the ghosts of ancient Egyptian hieroglyphs.

See all episodes from The Secret History of Writing