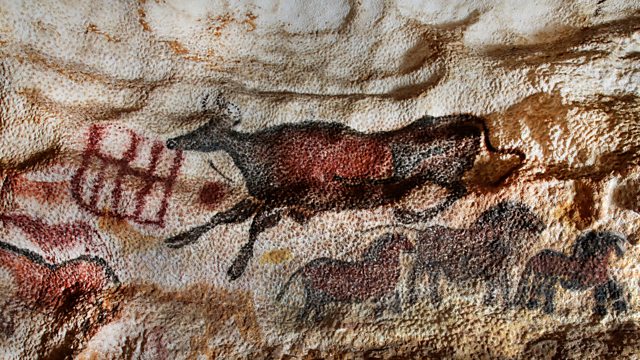 Melvyn Bragg and guests discuss the cave peoples, human or Neanderthal, who made hand outlines, abstract symbols and multicoloured images of prey animals in the Stone Age.

Melvyn Bragg and guests discuss ideas about the Stone Age people who created the extraordinary images found in caves around the world, from hand outlines to abstract symbols to the multicoloured paintings of prey animals at Chauvet and, as shown above, at Lascaux. In the 19th Century, it was assumed that only humans could have made these, as Neanderthals would have lacked the skills or imagination, but new tests suggest otherwise. How were the images created, were they meant to be for private viewing or public spaces, and what might their purposes have been? And, if Neanderthals were capable of creative work, in what ways were they different from humans? What might it have been like to experience the paintings, so far from natural light?

Alistair Pike
Professor of Archaeological Sciences at the University of Southampton

Alistair Pike at the University of Southampton

A virtual tour of Lascaux Cave

A virtual tour of Chauvet Cave

How we discovered that Neanderthals could make art – The Conversation

Norbert Aujoulat, The Splendour of Lascaux: Rediscovering the Greatest Treasure of Prehistoric Art (Thames and Hudson, 2005)

Jean Clottes, What is Palaeolithic Art?: Cave Paintings and the Dawn of Human Creativity (University of Chicago Press, 2016)

Jean Clottes and David Lewis-Williams, The Shamans of Prehistory: Trance and Magic in the Painted Caves (Harry N. Abrams, 1998)

David Lewis-Williams, The Mind in the Cave: Consciousness and the Origins of Art (Thames and Hudson, 2004)