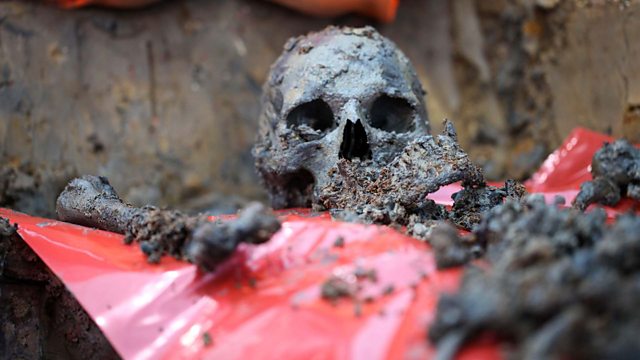 In advance of the construction of HS2, the biggest ever cemetery excavation in Britain reveals the forgotten stories of rich and poor in Georgian London.

Anthropologist Professor Alice Roberts and historian Dr Yasmin Khan dig deep into the huge excavations at Saint James’s in London, using their respective skills to reveal the stories of the forgotten fortunes of both rich and poor in Georgian London and of a city that was becoming the centre of a global empire.

Yasmin uses the historical records to explore the fascinating lives of the extraordinary and ordinary people buried at St James’s - from rapacious empire builders to the astonishing story of a tiny child who was about to be buried in the cemetery, only for it to be discovered that she was still alive.

The archaeologists also reveal the story of James Christie, founder of the world-renowned Christie’s auction house. Yasmin explores how a Scot of humble origins rose to the very top of class-conscious Georgian society.

Alice examines the skeletons of individuals and the contents of their graves to explore how the city shaped the lives of the citizens of Georgian London and how those citizens were obsessed with saving themselves from the grisly scourge that was sweeping London at the time – body snatchers were disgorging fresh bodies from London's cemeteries and selling them to the growing schools of anatomy in the city.

More than half of those buried in the cemetery are children. The archaeologists discover one incredibly poignant child’s grave good – extremely rare in cemeteries of this era. It is a Queen Anne doll that was clearly the child’s most treasured possession.

And they begin the search for lost Georgian celebrities - from champion boxers to global explorers. It is the first astonishing phase of the story of an excavation that discovers the real-life secrets of a city that changed the world.