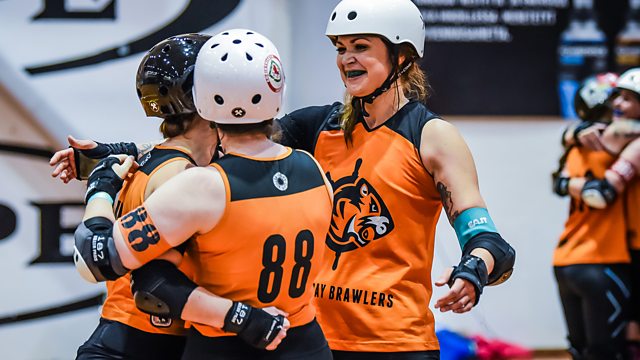 Hell On Wheels Series 1
Episode 1 of 3

After their star player breaks her ankle, the Tiger Bay Brawlers suffer their worst ever start to the roller derby season. Can they turn things around for the Euros 2019?

In 2018, roller derby’s Tiger Bay Brawlers faced the biggest moment of their sporting lives. Starting as rank outsiders, they won the bronze medal match at the European Championship. They were third in Europe. The dream is to top that glorious moment. But things are not going to plan. Kim, their star blocker (defender), suffered a career-threatening ankle break during a derby smash. The Brawlers have had their worst season ever since, playing four and losing four. With the Euros just eight weeks away, they need to turn things around and fast.

Kim tests her ankle in a B-team match. If she can come through unscathed, it will be a glimmer of hope for a team with a mountain to climb. Early practises reveal the Brawlers’ defence is weak, and fitness is poor. The squad is boosted by new player Rogue, one of the UK’s best jammers (attacker). But her arrival and Kim’s rapid return from injury put pressure on others for spots in the starting line-up.

Two players, Hannah C – who juggles being a mum and shifts at the supermarket and makes a 50-mile round trip to play derby - and Nitro-Jen, are in battle for a team slot. Jen – a team regular for the last three years - has suffered a dip in form and is determined to return to her best.

A competitive game against local rivals Bristol is an early chance for players to make a stake for a team place at the upcoming Euros 2019. A storming Tiger Bay victory gives captain Kid a selection headache. Whilst Kim works hard strengthening her ankle, life off track gets complicated. The plan was to leave Hereford and move to Cardiff, closer to her teammates. But new partner Niky lives in London, a city also home to the UK’s top roller derby team. There is a tough decision ahead.

See all episodes from Hell On Wheels