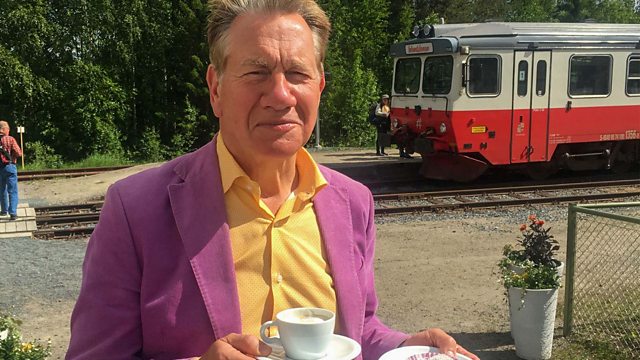 Stockholm to the Arctic Circle

Michael makes a scenic journey from Stockholm to Abisko. Michael celebrates Midsummer in Marielund, learns to decorate a Dala horse in Mora and takes an icy dip in one of the country’s 96,000 lakes.

Michael Portillo embarks on a scenic, thousand-mile rail journey from the Swedish capital, Stockholm, to Abisko in the northern reaches of the Arctic Circle. Steered by his 1936 edition of Bradshaw’s Continental Railway Guide, Michael boards a steam train to celebrate Midsummer in Marielund, learns to decorate a Dala horse in Mora and takes an icy dip in one of the country’s 96,000 lakes.

In Stockholm, Michael braves a precarious tour of the city from its rooftops before boarding a heritage tram to get the lowdown on 1930s Sweden from an expert. At the capital’s Royal Institute of Technology, Michael investigates the transport of the future in a near-vacuum tube. He tours Uppsala University and takes Sweden’s 1,300km Inlandsbanan railway, which was completed in 1937, to travel north to Ostersund and Kiruna.

Michael finishes deep in the Arctic Circle at a remote climate research station, where scientists are building on data recorded at the time his guidebook was published. En route, Michael learns why Sweden built the strategic inland railway on which he is travelling. He discovers how the nation created a welfare state, has lunch with traditional Sami people in Vilhelmina and checks into a chilly hotel made of ice.