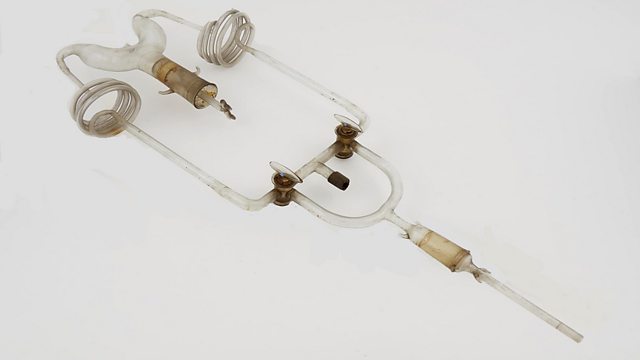 Mapping the evolution of birds and dinosaurs through their skulls; the wonders of yeast; and some complex glassware in the Science Museum's collection needs identifying

Skulls give researchers a great deal of insight into how an animal might have evolved, and skulls can be sensibly compared between species and groups of animals. The 10,000 species of bird around the world are what’s left of an even more diverse group, the dinosaurs. But research on their skulls has revealed that despite the birds’ exceptional diversity, they evolve far more slowly than their dinosaur relatives ever did. This is one of the findings of a huge skull mapping project at the Natural History Museum led by Anjali Goswami.

Marnie Chesterton delights Adam Rutherford with what she has recently learned about the single-celled fungus that is yeast. She recently visited the National Collection of Yeast Cultures in Norwich, which stores hundreds of thousands of strains of yeast. She discovered that yeast is not only responsible for the production and subtle flavours of bread, yeast and chocolate, but also that some species of yeast can actually clean carbon dioxide from the air and can be used to feed livestock.

The Science Museum Group looks after over 7.3 million items. As with most museums, the objects you see on display when you visit is only the tip of the iceberg of the entire collection. Up until now, many of the remainder (300,000 objects) has been stored in Blythe House in London. But now the collection is being moved to a purpose-built warehouse in Wiltshire. The move is a perfect opportunity for curators to see what’s there, re-catalogue long hidden gems and to conserve and care for their treasures. But during the process they have discovered a number of unidentified items that have been mislabelled or not catalogued properly in the past and some of them are just so mysterious, or esoteric, that the Science Museum needs the aid of the public to help identify them, and their uses. This week, Jessica Bradford, the keeper of collection engagement at the Science Museum is asking Inside Science listeners if they recognise, or can shed light on the possible use of the ‘glassware’ in the picture above. Send suggestions to Email: bbcinsidescience@bbc.co.uk or mysteryobject@sciencemuseum.ac.uk

What does the science say about the COVID risks of schools reopening? Dolphin ear autopsy

Coronavirus: The types of vaccine; How the UK is scaling up vaccine production