Schedule
BBC Radio 2
Bruce Springsteen: From My Home To Yours
Main content 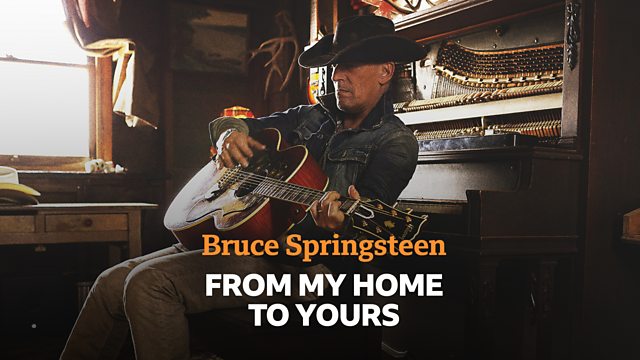 Bruce Springsteen: From My Home To Yours

Bruce turns DJ recorded at his home in New Jersey. This week he remembers Augusts gone by, and plays some summer classics including the Beach Boys, Lana Del Rey, R.E.M. & more

We've all had to learn new things during the pandemic, and rock superstar Bruce Springsteen is no exception! Locked down at his home in new Jersey, alongside wife Patti Scialfa, he's turned himself into a radio DJ, and the result is this new Radio 2 series.

Broadcasting from his house, each week Bruce will be playing an hour of - as he describes them - "topical tunes for hard times", an eclectic mix of records from his own collection that he loves, and talking about the strange days that we find ourselves in.

In this episode he remembers summers gone by, and - in a series of poetic interludes - talks about the childhood times he spent on the beach in New Jersey, the difficulty of sleeping when "the heat turns to steam", past girlfriends and his love of skinny dipping to pick out just a few choice memories!

And as well as Bruce's own music, there are summerclassics from The Jamies, Lonnie Donegan, Lana Del Rey, Ren Harvieu, the Beach Boys, R.E.M. and more!

An hour of exceptional music handpicked by the rock superstar

See all episodes from Bruce Springsteen: From My Home To Yours