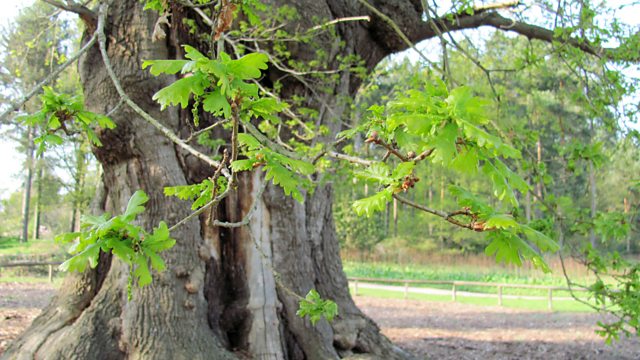 The Oak Papers by James Canton
Episode 1 of 5

James Canton spends time with an ancient oak, and explores the history and symbolic power of oak trees. Read by Jonathan Keeble.

Jonathan Keeble reads a fascinating account of the history and symbolic power of oak trees, by James Canton.

When a relationship breaks down, James Canton begins to spend time with an ancient oak tree near where he lives in Essex - the 800-year-old Honywood Oak.

“I began to visit the oak as one might visit a friend. From the first meeting there grew a strange sense of attachment I didn’t consciously recognise until I began to realise the significance that trees, and oak trees especially, can have in our lives.”

Spending time at the tree, James finds solace from his distress. More than that, he begins to feel bewitched by the power of the tree. It is then that he begins an exploration of the history of oak trees, and their vital importance in history and myth.

“As I’ve dug deeper into the historical and cultural layers of ancient Europe, I have begun to realise just how common the veneration of oak trees was.”

He meets people who work with oak, and artists who have been inspired by oak trees. And, as he sits at the oak, he records in detail the sounds and sights of the natural world around him.

“A wren pipes up, a staccato tic, tic, tic from somewhere in the centre of the oak. A hare appears on the path, all ears, lean and jittery, only to disappear into the long grasses and ferns that cover the soft slopes of the stream valley. It is a slice of time laid bare, a moment when the normal flow of life is frozen.”

Beautifully-observed nature writing and fascinating history, with a soundscape of the natural world, and music by Max Richter.

See all episodes from The Oak Papers by James Canton