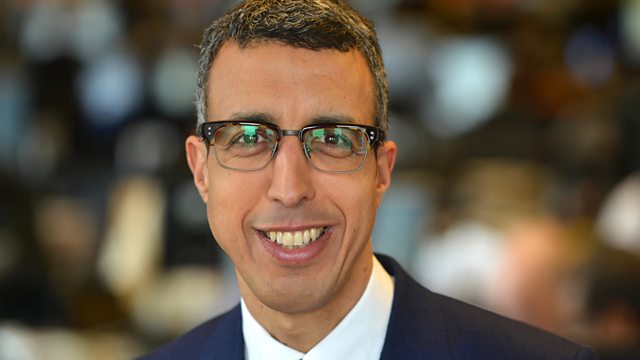 Mohammed and the Market

Kamal Ahmed tells the story of how money and trade have been at the heart of Islam from its very beginning. What lessons can western capitalism draw from this?

Islam and the financial crisis of 2008 are two of the most hotly debated topics of the past decade - but they aren’t usually mentioned in the same sentence. The legacy of one man brings them together - The Prophet Mohammed. He was an entrepreneur and trader, as well as the founder of one of the world’s great religions.

Kamal Ahmed, the BBC’s former economics editor, discovers how money has been closely entwined with the religious teachings of Islam right from its inception. At a time when we face multiple challenges to our economies and to our personal finances, he asks what lessons the West can draw from this.

Kamal Ahmed is with a curator in the British Museum examining a coin. It’s from the 8th century AD and looks like an Islamic dinar. It bears the inscription “There is no God but Allah alone”. But it was minted by the Christian King Offa of Mercia, the most powerful kingdom of Anglo Saxon England, and his head is on the coin. The British Museum medieval coin expert Gareth Williams tells Kamal how this came about.

Roll forward a millennium and Britons continue to seek to connect with Islamic finance. In 2013 the then Prime Minister, David Cameron, announced the government’s first sukuk, or sharia-compliant bond issue. His aim, he said, was to make the UK a centre of Islamic finance.

Kamal decides to find out more about the links between Islam and the West when it comes to market economics. Along the way, he discovers intriguing connections between the founding fathers of market economics and the ideas of medieval Islamic financial scholars.

The journey of discovery begins in 6th-century Mecca. We discover that Mohammed himself was a successful merchant, as was his wife Khadija bint Khuwaylid, and that ideas about the place of trade and commerce were embedded in his religious teachings. As Kamal finds out, “ money” and “wealth” weren’t the dirty words that they are in some of the Christian teaching of the New Testament. Unlike other religious leaders, such as Jesus and the Buddha, the Prophet was a rich man. In some accounts, one of the richest in the land. Not surprisingly then, the Prophet had many things to say about the right way of shaping commercial life. His instructions on how to conduct business, from the need to have accurate scales, to the prohibition of interest, are enshrined in the Qur’an and the Hadiths, the record of the traditions or sayings of the Prophet.

These writings form part of an unknown aspect of Sharia Law. To many non-Muslims, the word “sharia” represents something that they have no connection with. But what Sharia Law has to say about trade is far from unfamiliar – in fact, it lies at the root of our own ideas of market economics. We might have heard that interest, or usury, is banned under Islam, but probably less well-known is the debt that our financial system owes to Islamic scholars writing several centuries before their Enlightenment counterparts.

Kamal discovers that some of the most famous ideas of modern economics - such as Adam Smith’s theory on the division of labour or, more recently, Arthur Laffer’s curve - had already been expressed hundreds of years earlier by medieval Islamic thinkers such as Ibn Khaldoun. Kamal explores these connections and tries to find out how the ideas travelled from medieval Islam into the head of the father of capitalism, Adam Smith.

Kamal ends his journey by bringing the story up to date. In addition to David Cameron and George Osborne’s issuing of an Islamic bond, Sharia-compliant products are available on some high streets too for punters looking for a mortgage or a savings plan.

Kamal meets Islamic finance experts who argue that these centuries-old sharia principles of finance make for a much more stable system. Why? Because, advocates of Islamic finance claim, it is not based on high-risk debt, but on risk-sharing.

But it’s not as straightforward as that. Many argue there are serious drawbacks to the risk sharing idea - it generates greater inequality. Islamic finance lowers risk by lending only to the rich.

So, does the story of our debt to Islamic financial ideas offer any lessons to a capitalist system still trying to find its way after the crisis of 2008? Has the answer to our modern economic malaise been hiding in plain sight?