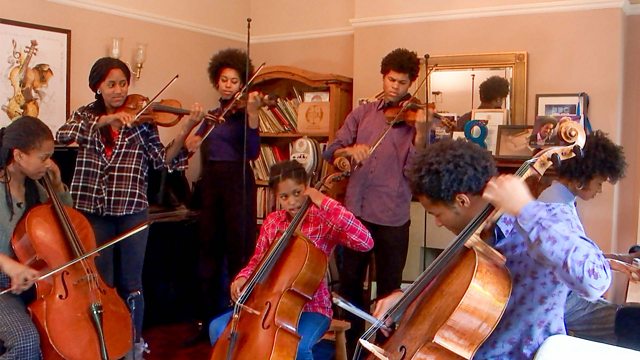 This House is Full of Music

Remote cameras capture a lockdown concert performed by the Kanneh-Mason family from their home in Nottingham, with interviews with the seven musically gifted siblings.

In its first remote-access film, imagine... offers a unique and intimate portrait of an exceptionally gifted musical family in lockdown – the Kanneh-Masons. In 2016, cellist Sheku Kanneh-Mason won BBC Young Musician award. In 2018, he released his debut album, and earlier this year his second album, Elgar, became a top ten hit. He achieved global fame when he performed solo at the wedding of the Duke and Duchess of Sussex in 2018 in front of a TV audience of two billion people worldwide.

But it doesn’t stop there. His six siblings are also phenomenally talented musicians: three are former BBC Young Musician category finalists, and the eldest sibling, pianist Isata, has also presented for the Proms. Ever since lockdown began, the seven young prodigies, all aged between 10 and 24, have been isolated in their family home in Nottingham along with their parents, Stuart and Kadiatu, and Sheku and Braimah’s flatmate, fellow Royal Academy of Music student Plinio Fernandes. Unable to perform publicly, the family decided to stage a vibrant and eclectic concert in the only place they can - their own home - and granted the BBC exclusive access using remotely operated fixed-rig cameras, with video messaging to capture interviews. Exploring both the family’s music making and their family life, the programme culminates in a moving concert that is a testament to the power of music to carry us through the most difficult of times.