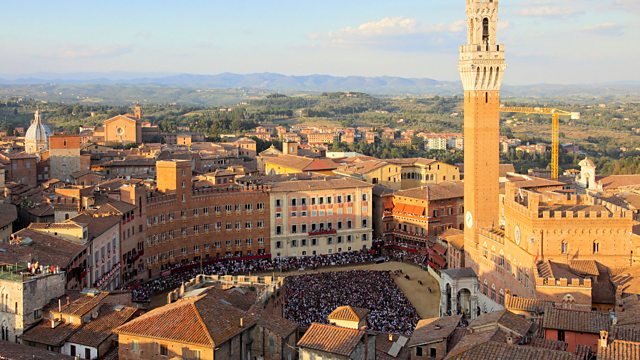 A Month In Siena by Hisham Matar
Episode 1 of 5

With a keen interest in the paintings of The Sienese Scool, Hisham Matar makes a month-long trip to Siena, the city he has worshipped from afar.

When Hisham Matar was nineteen years old he came across the Sienese School of painting for the first time. In the year in which Matar's life was shattered by the disappearance of his father. the work of the great artists of Siena seemed to offer him a sense of hope. Over the years that followed, his feelings towards these paintings would deepen and, as he says, 'Siena began to occupy the sort of uneasy reverence the devout might feel towards Mecca or Rome or Jerusalem'.

A Month in Siena is the encounter, 25 years later, between the writer and the city he had worshipped from afar. It's a dazzling evocation of an extraordinary place and its effect on the writer's life. It's also an immersion in painting, a consideration of grief and a profoundly moving contemplation of the relationship between art and the human condition.

'Bewitching . . . Meditating on art, history and the relationship between them, this is both a portrait of a city and an affirmation of life's quiet dignities in the face of loss.' - The Economist, Books of the Year

In episode 1, Hisham Matar at last visits Siena, to immerse himself in the atmosphere of the place, and spend time amongst its great works of art.

See all episodes from A Month In Siena by Hisham Matar