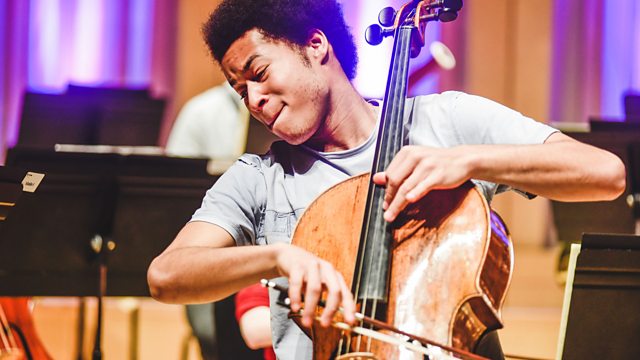 Sinfonia Cymru are joined by young cello star Sheku Kanneh-Mason for a sparkling programme including Haydn's First Cello Concerto and Beethoven's Symphony No 1.

Sinfonia Cymru match their trademark sparkle to a programme of works that themselves fizz with confidence, drama and vitality. They are joined by young cello star, Sheku Kanneh-Mason, fresh from his Royal Wedding performance and chart-topping debut album, to perform Haydn’s First Cello Concerto. Later in the programme, composer Charles Ives attempts nothing less than solving the riddle of life, the universe, and everything, in his extraordinary six-minute piece, The Unanswered Question. Their concert begins with CPE Bach, whose music is daring and brimming with passion, and they finish with Beethoven’s musical announcement to the world that he might just be the greatest symphonist of all time.

Another chance to hear this concert recorded in March 2019 at the Riverfront, Newport. Presented by Nicola Heywood Thomas.

Notes from the New World

See all recipes from Sinfonia Cymru and Sheku Kanneh-Mason