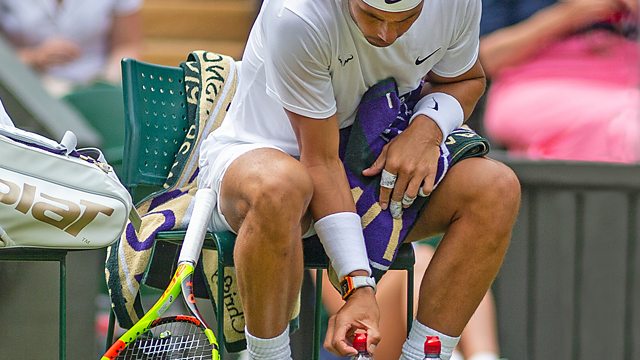 Writing's on the Wall

Martin Perry has spent years coaching sportsmen and women to build confidence and handle the psychological demands of their game. Here, he delves into the popular, very personal and often secretive sporting superstitions - regularly noted, but rarely discussed.

Along the way, Martin discovers superstitions can reveal as much about the mindset of the player, as about what it takes to emerge victorious when the competition is fierce and the stakes are high.

At the Muller Indoor Grand Prix in Glasgow, athletics stars from around the world reveal their own good luck charms. England’s Rugby World Cup finalist Lewis Ludlam runs through an extensive warm-up routine that includes a stuffed toy. And why did Argentinian football legend Diego Maradona once try to get his hands (or feet) on former Spurs striker Clive Allen’s lucky boots?

Martin takes a moment to explore those numerous and long-held rituals of tennis’ King of Clay, Rafael Nadal, which both baffle and entertain millions of tennis fans every year.