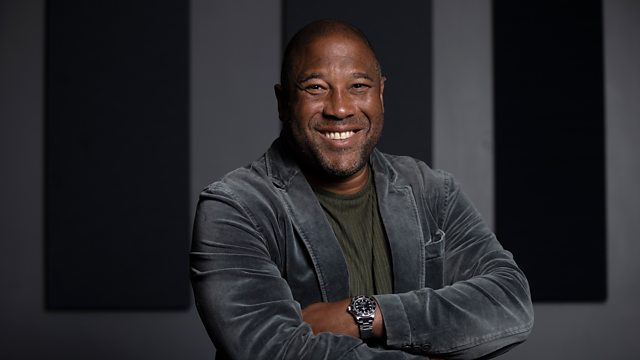 Richard Coles and Viv Groskop talk to England football legend John Barnes who earned 79 caps over 12 years. His talent was spotted as a teenager and he began his career at Watford, going on to have huge success at Liverpool in the 1980s and 90s. He has been a coach, a football manager and even scored a number 1 single with his contribution to football song World In Motion, and now works as a commentator and pundit.

DJ, raconteur, author, producer, broadcaster and Fun Lovin’ Criminal, Huey Morgan was born in New York and grew up listening to Latin American Music through his Puerto Rican heritage. He eventually became the frontman of rock band Fun Lovin’ Criminals and now has his own shows on Radio 2 and 6Music.

Mudlark Lisa Woollett is a photographer who has always been drawn to beaches and riverbeds, combing and searching for objects left behind from other times. Lisa is particularly drawn to the Thames where she has unearthed the story of her mother’s side of the family, the Tolladays. Her book Rag and Bone charts the history of this family of dustmen and scavengers and shows that the things we discard often find their way to the surface again.

Listener Jane Ferriday contacted Saturday Live to tell us the story of her birth parents, who met and fell in love during the Second World War, whilst they were based at an airbase in Berkshire. Her father was already married, and returned to his family in America and her mother placed her up for adoption. It was years later that Jane was able to find out what really happened and to piece together her story.

And we'll have the Inheritance Tracks of actor and comedian Sally Phillips.