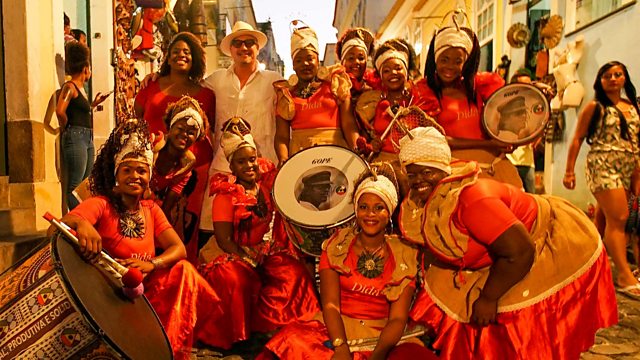 BBC Radio 6 Music DJ Huey Morgan begins his Latin music adventure in Rio de Janeiro with a visit to Mangueira Samba School as they prepare for carnival. It is an important time. Joining rehearsals, Huey learns that the country’s government has come out against carnival’s hedonistic atmosphere. This samba group are just one of many planning a protest, and Huey realises that the revolutionary spirit isn’t just in Brazilian music, it is out on the streets.

Huey then hits the beach but discovers that Brazilian music in the 1960s wasn’t confined to the slick bossa nova swing of the Girl from Ipanema. Released in 1964, this song provided the soundtrack for cocktail parties around the world, but in Brazil that same year a military dictatorship had taken control of the country and civil unrest was brewing.

Huey meets up with Gilberto Gil, who pioneered a new, politically conscious sound to push back against the authoritarian government. Fusing bossa nova with psychedelic rock, avant-garde musique concrete, samba, funk and soul, Tropicália was so radical, and its social implications so politically profound, that Gil and fellow musician Caetano Veloso were arrested, imprisoned and finally exiled in 1969. Tropicália burned brightly for only a few short years, but its impact still resonates today.

Landing in Salvador, Huey is straight into the heat and the chaos of Brazil in the run-up to carnival. Everywhere you turn there are Afro blocs rehearsing, enormous drum ensembles beating out samba rhythms. Salvador is the ancient capital of Brazil, and it was here that millions of slaves were shipped to from Africa by the Portuguese conquistadors - more than anywhere else in the Americas. Salvador is said to be the largest African city outside of Africa, and the revolutionary sound of Brazil has its foundations here. These Afro blocs are more than just music ensembles - they also play a crucial political role in the communities that host them. Huey meets with Carlinhos Brown, percussionist and Salvador native, to experience the rhythms of an Afro bloc up close and to talk about how Afro-positive music has shaped the sound of Brazil. Huey also joins BaianaSystem to learn the secrets of the Bahian guitar - a revolutionary electric instrument invented in Salvador in the 1940s and performed on floats called trios electricos that traverse the city during carnival.

Leaving Salvador, Huey heads to São Paulo, the centre of the Brazilian music scene today, to meet up with his good friend Supla. Taking a tour of the punk and metal scene, Huey discovers that Brazil is still using music to protest against the authoritarian government currently in power and heads to the studio to meet Karol Conka, a rapper and outspoken feminist who is making party anthems with a purpose.