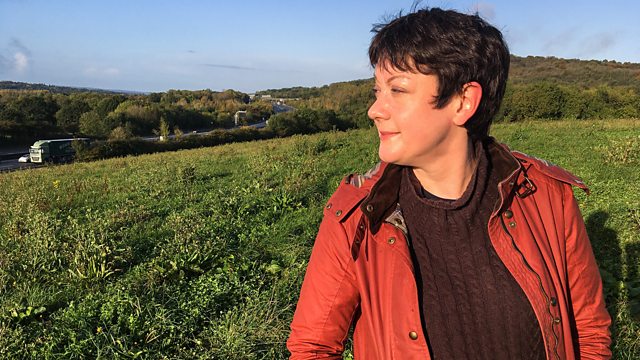 The Hidden Wilds of the Motorway

Author and naturalist Helen Macdonald embarks on a clockwise loop around the M25 to discover if there is a wild side to Britain's busiest road.

Is there a wild side to Britain’s busiest road? Author and naturalist Helen Macdonald embarks on a clockwise loop around London’s orbital motorway - searching for hidden wildness and natural beauty within the sight and sound of the M25. Along her journey, Helen encounters the remarkable people, plants and animals living above, beside and beneath the motorway, and delves into the controversial history of the UK’s longest and least-loved bypass.

The M25 has been part of Britain’s landscape for nearly 35 years, so how has the natural world adapted to the motorway carving a path through its environment? Starting just south of the Thames at Kent’s Junction 1, Helen explores the woodland that lines the first 40 miles of the M25. In a first sign of how animals’ lives are shaped by the man-made world, great tits are changing the pitch of their calls in order to be heard above the roar of the road. But humans have often been less willing to adapt to the M25’s noisy presence.

The village of Shoreham won a battle to divert the motorway, thanks to the landscape paintings of 19th-century artist Samuel Palmer. Palmer’s paintings are highly prized today for their pre-impressionistic style and their idyllic visions of a benign countryside. Although Palmer’s vision was at odds with the harsher reality for farmworkers of the time, 20th-century locals leveraged their emotive value to save Shoreham’s valley and re-route the motorway through nearby woods.

Autumn rains trigger fungi to emerge into the roadside woodland. One species, Neurospora, offers a potential solution to our congested highways. Neurospora’s mobile DNA flows smoothly around an incredibly complex network of fungal freeways. Scientists are trying to figure out the fungi’s secret, in the hope of one day inspiring more robust transport networks.

The western arc of the motorway crosses a watery world of rivers and canals. Helen dives into the serene spaces created in gaps between the motorway and the waterways. Local author JG Ballard was obsessed with the hidden spaces around our urban infrastructure, using them as settings for his dystopian novels. Where the M25 crosses the river Thames, Helen searches for plant life on the damp concrete beneath the motorway. Mosses are often overlooked, but Natural History Museum botanist Dr Silvia Pressel reveals that the drought-resistant properties of these primitive plants are key to how plants made their move from water to the uninhabitable rocky land. This huge leap 500 million years ago paved the way for all of today’s land plants and the mammals that rely on them.

The final watercourse Helen explores is the river Chess, one of only 200 chalk streams in the world, 85% of which are in southern England. This crystal-clear waterway passes right beneath the motorway through a tiny non-descript culvert. In early winter, female brown trout dig their nests right by the motorway in the gravel of the riverbed - a ritual unchanged for millions of years.

The motorway’s northern arc is defined by grasslands where Helen discovers foxes and kestrels in the verges beside the motorway. At Rothamsted Research Station, she discovers why this unfertilized environment is such a special place for wildlife, in contrast to the less diverse cropland beyond.

At Waltham Abbey in Essex, Helen reveals an incredible world lurking in the rubble of what was once Britain's largest gunpowder factory, where the wild has reclaimed the land. Just beyond this derelict landscape lies Epping Forest, home to 500 fallow deer. The motorway presents a huge potential hazard to the animals whilst they are distracted by the autumn rut. Luckily, the deer have worked out how to cross the motorway safely via a little-used farm bridge.

In the final eastern quarter, Helen finds industrial wastelands being reclaimed by nature. The co-ordinated acrobatic display of a flock of lapwing inspires Helen to meet a team of Cambridge University computer scientists. They are using animal swarm-inspired rules to programme fleets of robot cars, showing how, by co-operating with each other, they are able to avoid traffic jams. This semi-autonomous technology could soon be applied to our own road vehicles, allowing our motor cars to self-organise the solutions to potential snarl-ups. By borrowing simple principles from swarming animals, everyone will get home faster.

Helen concludes her lap of the M25 by approaching the giant QEII suspension bridge over the River Thames. Just upriver, Helen discovers the wonderfully wild Rainham Marshes. This former MOD firing range has been turned into a sanctuary for waders and wintering wildfowl. Rainham is a final example of how the brownfield sites encountered all along the motorway have an incredible capacity for wildlife. They are often already earmarked for development; in many cases we should be doing our best to protect them.