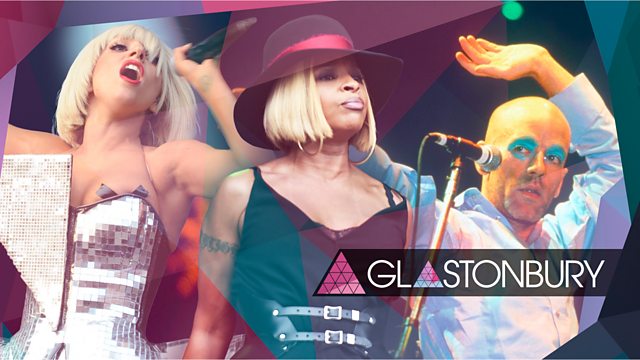 Clara Amfo and Lauren Laverne celebrate the weekend that would have marked 50 years of the Glastonbury Festival, with performances including Lady Gaga’s first and only Glastonbury appearance in 2009.

Clara Amfo and Lauren Laverne present a musical journey celebrating the weekend that would have marked 50 years of the Glastonbury Festival with an inviting blend of great performances from the archives and the odd live acoustic set from contemporary artists dropping in.

The previously unseen or rarely shown moments include highlights from rockers Nick Cave and the Bad Seeds, who ruled the penultimate slot on the Pyramid Stage way back in 1999, Lady Gaga’s first and only Glastonbury appearance in 2009, which saw her performing hits from her number 1 debut The Fame and went down in the festival’s history as one of the biggest pop moments Worthy Farm has ever seen, the 2003 legendary headline set from R.E.M., which saw frontman Michael Stipe and Co take the stage by storm, R ‘n’ B queen Mary J Blige’s 2015 breathtaking Pyramid takeover to a dedicated crowd undeterred by the rain and Britpop superstars Blur’s energetic and emotional 2009 headline moment.