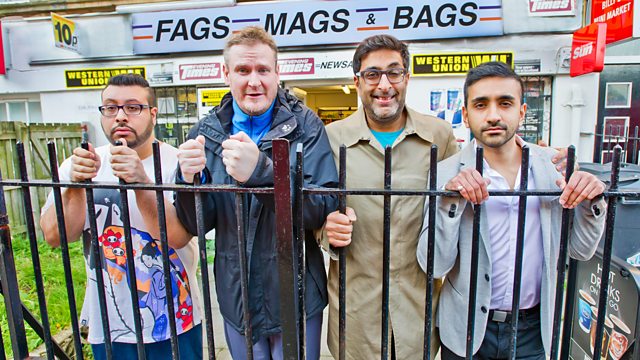 Comedy set in a Scots-Asian corner shop. Dave introduces his new girlfriend Margot, but not everyone is convinced. Written by and starring Sanjeev Kohli and Donald Mcleary.

More shop based shenanigans and over the counter philosophy, courtesy of Ramesh Mahju and his trusty sidekick Dave.

Set in a Scots-Asian corner and written by and starring Donald Mcleary and Sanjeev Kohli, the award winning Fags, Mags & Bags returns for a 9th series with all the regular characters and some guest appearances along the way.

In this episode, Dave introduces his new girlfriend, Margot. Love is in the air, but not everyone is convinced by her motives after it’s revealed they met on a Moving Alan fan website.

Join the staff of Fags, Mags and Bags in their tireless quest to bring nice-price custard creams and cans of coke with Arabic writing on them to an ungrateful nation. Ramesh Mahju has built it up over the course of over 30 years and is a firmly entrenched, friendly presence in the local area. He is joined by his shop sidekick Dave.

Then of course there are Ramesh’s sons Sanjay and Alok, both surly and not particularly keen on the old school approach to shopkeeping, but natural successors to the business. Ramesh is keen to pass all his worldly wisdom onto them - whether they like it or not!