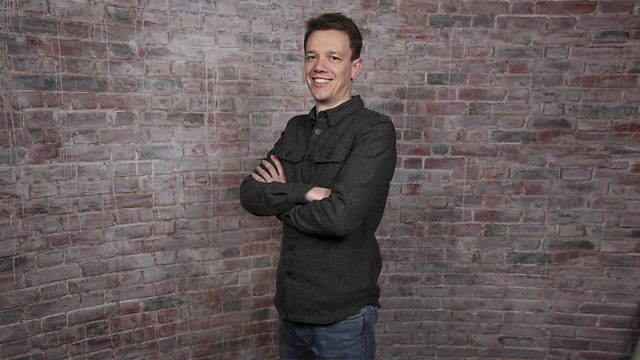 A performance of Offenbach's Tales of Hoffmann recorded at the Vienna State Opera in September 2019 to celebrate the composer's 200th anniversary.

A performance of Offenbach's Tales of Hoffmann recorded in Vienna last year to celebrate the composer's 200th anniversary.

The opera is based on an 1851 play depicting the spiritual and moral decline of the poet ETA Hoffmann, through the stories of three successive loves – Olympia, Giulietta, and Antonia. Completed in the final few months of his life it was Offenbach's last attempt at recognition for serious opera rather than the frivolous works for which he was best known. He died four months before the premiere.

The poet Hoffmann sits at his writing table. Spirits of wine and beer arrive and then vanish. Hoffmann's Muse appears, swearing to protect him from the dangers of love. She will transform herself into Nicklausse, a young student, to guide Hoffmann.

Councillor Lindorf intercepts Andrès, who is employed by Stella, a lovely opera singer appearing this evening in Don Giovanni. Lindorf bribes Andrès to get a letter from Stella to Hoffmann. The letter is a declaration of love for the poet, and includes the key to her dressing room. Lindorf may be old and pitiful-looking, but he has power and money. He intends tonight to steal Stella from Hoffmann. In Luther's tavern, waiters prepare the tables for the arrival of Hoffmann, a regular client. Boisterous students invade the tavern, demand wine, curse Luther, toast Stella, and wait impatiently for Hoffmann. He arrives with Nicklausse. Hoffmann seems tormented, gloomy; still, the students insist he sings a funny song about Kleinzack whom he calls a "dwarf", but his mind wanders and he describes a beautiful woman instead. The students bring him out of his reverie. Waiters light the punch. Hoffmann spots Lindorf and sees in him the eternal antagonist who ruins his luck in everything, especially love. Their curiosity roused, the students demand that Hoffmann tell them the name of his mistress. There are three, he answers: Olympia, a young girl; Antonia, an artist; and Giulietta, a courtesan. The students decide not to return to the opera - they prefer to smoke their pipes and to listen to Hoffmann's tales of his three loves.

Physics is Spalanzani’s passion, and this eccentric inventor has constructed a perfect automaton with such genuinely human traits that he passes it off as his daughter, Olympia. Tonight he will present Olympia to society. He's counting on his latest creation to help him recoup 500 ducats that he lost when his banker, Elias, failed. The first guest arrives early; it's Hoffmann, his student, who has been admiring Olympia from afar. Left alone for a moment with her, Hoffmann gets one glimpse of Olympia and falls in love. Nicklausse warns him off, comparing his new love with a doll with enamel eyes. Is this a presentiment? Coppélius enters, introducing himself as a friend to Spalanzani. In fact, he has come to reclaim the eyes he constructed for Olympia unless Spalanzani can pay him off. In the meantime, Coppélius tries to sell Hoffmann his strange inventions - barometers, hygrometers and pairs of lovely eyes. Nicklausse is sceptical, but Hoffmann eagerly buys some magic glasses that make his dreams of Olympia appear real.

Spalanzani returns and is alarmed to find Coppélius waiting. Coppélius wants a share of the profits, and Spalanzani sends him away with a bad cheque drawn on the bankrupt Elias. As he leaves, Coppélius advises Spalanzani to marry Olympia off to Hoffmann. Cochenille, a servant, announces the guests have arrived.

The guests marvel over the enchanting Olympia, who sings as Cochenille accompanies her on the harp. Her exquisite song is interrupted at times by strange mechanical noises, but Hoffmann, dazzled by his magic glasses, listens rapturously. Left alone with Olympia, Hoffmann declares his love and believes he is loved in return. But at their first embrace, Olympia runs away. Nicklausse bursts in with some disturbing rumours about Olympia that are circulating at the party. Hoffmann ignores the warning and runs off in search of his beloved. Coppélius promises to avenge himself on Spalanzani, who tried to swindle him with a worthless cheque. The guests return. Hoffmann waltzes with Olympia, who quickens the pace to such a frenzy that she seems to have gone quite mad. Hoffmann falls and breaks his magic glasses; Olympia must be taken away. Coppélius is waiting for her. He smashes the doll to pieces. Hoffmann realizes his folly: he was in love with an automaton.

A young girl sings a nostalgic song about her lost love. Antonia Crespel dreams of becoming a famous diva like her mother, who is now dead. But Antonia doesn't know that she has inherited her mother's fatal illness as well as her glorious voice. To save his daughter's life, Crespel must keep Antonia from excitement and exertion. He forbids her to sing and prohibits all relations with her lover Hoffmann. Crespel instructs the old, deaf servant Frantz not to open the door to anyone. Frantz is happy to be alone to sing away his frustrations Hoffmann bursts in looking for Antonia, who rushes in at the sound of his voice. The two declare their love and promise to marry. Hoffmann begs her to sing. She happily obliges him, but at the end of the song she nearly faints. Crespel returns. Antonia runs away; Hoffmann hides. Frantz announces the arrival of Dr. Miracle, the family physician. Crespel denounces Miracle, calling him a murderer who will destroy his daughter as he destroyed her mother. Dr. Miracle demonstrates his hypnotic powers. Hoffmann understands now that Antonia is in danger; if she sings, she will die. At his urging, Antonia reluctantly agrees to give up singing and her dreams of fame. Dr. Miracle, however, doesn't give up on anything. He returns to torment Antonia, asking her if she can sacrifice her talent to be a middle-class housewife. At first she withstands temptation, but when Miracle conjures up the voice and image of her mother, she can resist no longer - she must sing. Goaded on by the demonic doctor, Antonia sings herself to death. In desperation, Crespel turns on Hoffmann, but Nicklausse is there to restrain the grieving father. They are all too late: the devil has triumphed once again, aided by his servant, Frantz.

Giulietta the beautiful courtesan and Nicklausse sing a barcarolle to this “night of love".

Disappointed in love, Hoffmann has become a cynic who prefers wine and cards to women. Schlémil and Pitichinaccio, fight for Giulietta’s affections. Nicklausse tells Hoffmann he will drag him off at the first sign of infatuation. Hoffmann scoffs at this: only a fool could lose his heart to a courtesan. As the two friends leave, Dapertutto appears and vows that Hoffmann will indeed lose his heart ¬- to the bewitching Giulietta. A woman will gladly lose her soul for a glittering jewel says Dapertutto as he uses a diamond to lure Giulietta to him. To keep the diamond, Giulietta must promise Dapertutto that she will seduce from Hoffmann his reflection - just as she bewitched Schlémil to get his shadow. Giulietta uses her wiles to captivate Hoffmann. His sincerity touches her - for a moment she seems to want to save him. But in the end, Hoffmann falls under her spell and offers her not only his image but his soul. Schlémil finds the two alone together and is enflamed with jealousy. “Let's kill him,” suggests Pitichinaccio.

The gondolas come to take Giulietta away. Hoffmann demands that Schlémil give up the key to her room. The two men prepare to fight. Dapertutto lends Hoffmann his sword. Schlémil is fatally wounded. Hoffmann takes the key, but when he looks for Giulietta, she has forsaken him, choosing a diamond instead of his love.

So ends the tales of Hoffmann, the story of his three loves. When Nicklausse suggests that Stella is the incarnation of all three women, Hoffmann attacks his mentor in a drunken rage. By the time Stella arrives, Hoffmann has drunk himself into oblivion. Andrès, now in Lindorf's service, introduces Stella to the Councillor, who triumphantly escorts her to his car.

Abandoning the character of Nicklausse, the Muse assumes her true form. She promises to ease Hoffmann's sufferings, telling him that love in life is an illusion. The suffering poet returns to his writing desk to continue his search in his Art.