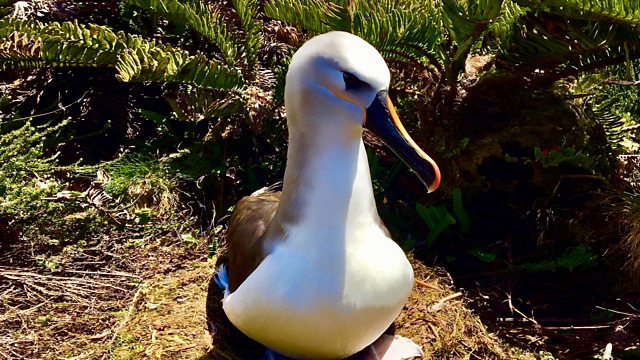 The Vet at the End of the World

Taking field recordings to a new level - a day in the life of veterinarian Joe Hollins, under the shadow of the volcano on Tristan Da Cunha - topped off with a crater lake plunge.

Angry bulls, furious penguins, enraged seals! In the shadow of the volcano 'Between the Ears' gets a microphone close up to enjoy the action, as veterinarian Jonathan Hollins, gives us a taste of life with the remote animals and sea life of Tristan Da Cunha.

On an island of a population of around 250 people, a thousand sheep and many more penguins, Joe also gets a flavour of what happened to the islanders when the volcano last erupted and they were forced to leave their homes, sixty years ago. Cracks in the ground were opening and closing - one sheep fell in! Boats took them to a nearby penguin colony where they sheltered until rescued. Sent to live in the UK , all chose to return to Tristan as soon as it was declared safe by an expeditionary force sent out by The Royal Society.

The island was just as they had left it, the settlement miraculously spared, though all the sheep mysteriously disappeared... there are theories as to why!

Memories of the volcano are mixed with Joe's daily life - the domestic close up sounds of cows birthing, bulls hoisted onto land from bucking fishing vessels and gong clanging to bring the islanders together.

This rocky outcrop was claimed by the Dutch, the British, the Portuguese, and even an American Privateer, geographically useful to all in its splendid isolation, (even in the 20th century the islanders only heard about the ‘result’ of the First World War a year after it finished). Today, we might envy their close community and isolation in a world endangered by today’s globalisation.

Joe was lucky to get permission to record during his time there, by the island council, scarred by their previous experiences with the ‘press’, most particularly during that 18 months living as refugees in the UK.

From the most remote community in the world – Tristan Da Cunha - the sounds, songs and tales of a whole island committed to socially isolating – together.

With grateful thanks to the people of Tristan Da Cunha.

Music: as sourced by Danny Webb from 'Rogue’s Gallery' - a series of sea shanties and pirate songs.
And 'Imaginary Songs From Tristan Da Cunha' by Deathprod.

Songs of the Mojave Desert