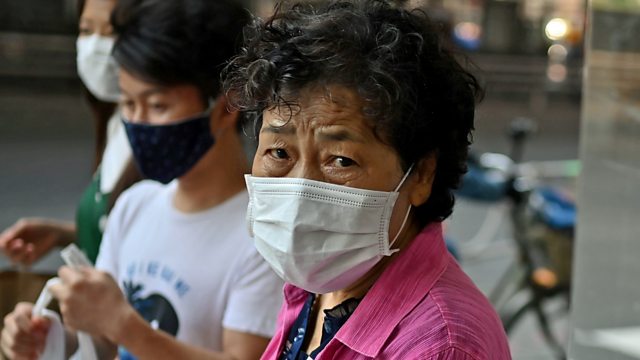 Did Japan get lucky?

Stories from South Asia, Italy, Iraqi Kurdistan, South Africa and how Japan escaped the worst of the pandemic. Was it partly down to good luck? With Kate Adie.

Japan has some very densely populated cities and the world’s highest proportion of elderly citizens. A disaster waiting to happen in the coronavirus pandemic? But the country has had a low death rate, despite only imposing a mild lockdown. What's the secret, or was it just luck, asks Rupert Wingfield-Hayes in Tokyo.
The George Floyd anti-racism protests have been supported in Asia too, but the conversation around race and colour is very loaded for South Asians themselves – where the criticism has been that the deep divides within South Asian society itself aren't scrutinised enough. There can even be discrimination in the same family, if siblings have different skin tones, as Karishma Vaswani has found.
In Italy, lockdown was imposed in February, and Italian children haven’t been to school since, nor are there plans for them to return before September. And the lockdown was so strict, that most children couldn't see their friends even in a socially-distanced way. But then a mayor had an idea, as Dany Mitzman reports.
Fancy a walk in the fresh mountain air? How about Northern Iraq? Iraqi Kurdistan may be better known for armed conflict, but has now become a location for outdoor pursuits with a long-distance hiking trail. There's still the risk of mines or drone strikes, but the reward of beautiful scenery and greater social freedoms than in the cities, as Leon McCarran found.
A plant that grows across much of Africa - Artemisia Afra, a species of wormwood – was recently touted as a cure for Covid-19 by the President of Madagascar. But in the family of Nomsa Maseko in South Africa, the herb has always been used as a remedy for colds and chest complaints. Until the shrubs were stolen from the front garden...
Presenter: Kate Adie
Producer: Arlene Gregorius