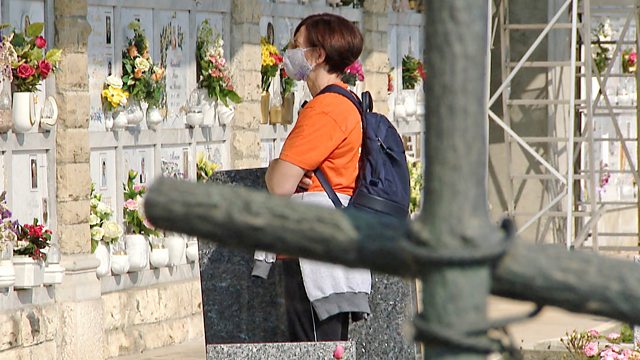 Stories from Colombia, the United States, and Italy's Lombardy region, the former epicentre of the coronavirus pandemic. With Kate Adie.

Italy's northern region of Lombardy became the epicentre of the coronavirus pandemic in February. Death rates soared. In Bergamo, six thousand people died in March. Mark Lowen returns to Lombardy to meet some of the bereaved and finds that politicians are passing the buck as to why cities locked down too late.
Colombia had a thriving economy before the pandemic, and has been host to almost two million Venezuelans who fled their country due to its economic and political crisis. Now, their dreams of a better life have turned to despair. Lockdown stops them earning a living, landlords evict them, and they're reduced to begging for food to survive, as Mat Charles has been finding.
Travel restrictions are gradually being lifted across the world, allowing more people to take airplanes again. But what is it actually like to fly now? Jean Mackenzie reports for the BBC from Brussels, and has been on numerous flights to cover the pandemic. She found the usual bustle of check-in queues, airport cafes, and departure lounges has given way to something more dystopian.
The United States has been going through tempestuous times, and New York City in particular. The city suffered around 22,000 Covid-19 deaths. And the fall-out of the killing of George Floyd led to street protests against police racism. Amidst the deaths, there was also new life. Nick Bryant’s daughter Honor was born. Becoming a father again at such a turbulent time prompted him to him to re-evaluate his relationship with this adopted homeland, and to write a letter to Honor.
Presenter: Kate Adie
Producer: Arlene Gregorius

Did Japan get lucky?